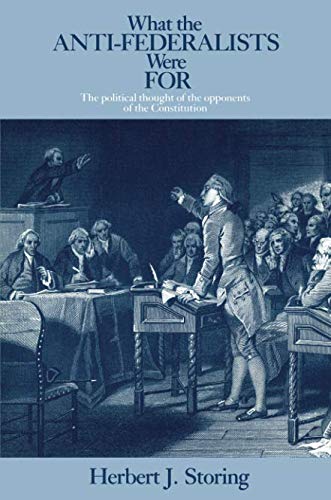 What the Anti-Federalists Were For: The Political Thought of the Opponents of the Constitution

The Anti-Federalists, in Herbert J. Storing’s view, are somewhat paradoxically entitled to be counted among the Founding Fathers and to share in the honor and study devoted to the founding. “If the foundations of the American polity was laid by the Federalists,” he writes, “the Anti-Federalist reservations echo through American history; and it is in the dialogue, not merely in the Federalist victory, that the country’s principles are to be discovered.” It was largely through their efforts, he reminds us, that the Constitution was so quickly amended to include a bill of rights.

Storing here offers a brilliant introduction to the thought and principles of the Anti-Federalists as they were understood by themselves and by other men and women of their time. His comprehensive exposition restores to our understanding the Anti-Federalist share in the founding its effect on some of the enduring themes and tensions of American political life. The concern with big government and infringement of personal liberty one finds in the writings of these neglected Founders strikes a remarkably timely note.