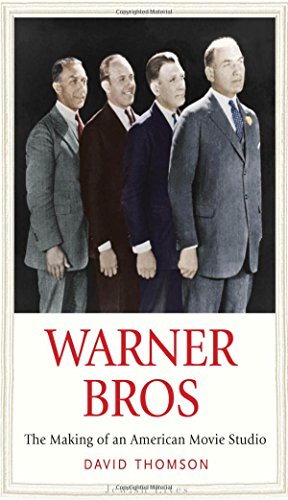 From the prizewinning Jewish Lives series, behind the scenes at the legendary Warner Brothers film studio, where four immigrant brothers transformed themselves into the moguls and masters of American fantasy

Warner Bros charts the rise of an unpromising film studio from its shaky beginnings in the early twentieth century through its ascent to the pinnacle of Hollywood influence and popularity. The Warner Brothers—Harry, Albert, Sam, and Jack—arrived in America as unschooled Jewish immigrants, yet they founded a studio that became the smartest, toughest, and most radical in all of Hollywood.

David Thomson provides fascinating and original interpretations of Warner Brothers pictures from the pioneering talkie The Jazz Singer through black-and-white musicals, gangster movies, and such dramatic romances as Casablanca, East of Eden, and Bonnie and Clyde. He recounts the storied exploits of the studio’s larger-than-life stars, among them Al Jolson, James Cagney, Bette Davis, Errol Flynn, Humphrey Bogart, James Dean, Doris Day, and Bugs Bunny. The Warner brothers’ cultural impact was so profound, Thomson writes, that their studio became “one of the enterprises that helped us see there might be an American dream out there.”

Jewish Lives is a prizewinning series of interpretative biography designed to explore the many facets of Jewish identity. Individual volumes illuminate the imprint of Jewish figures upon literature, religion, philosophy, politics, cultural and economic life, and the arts and sciences. Subjects are paired with authors to elicit lively, deeply informed books that explore the range and depth of the Jewish experience from antiquity to the present.

In 2014, the Jewish Book Council named Jewish Lives the winner of its Jewish Book of the Year Award, the first series ever to receive this award.

“Superb.” –The Guardian
Read more
Learn what other customers say about this product Read more