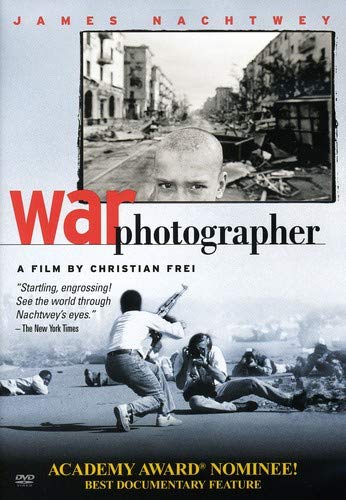 Nominated for the Academy Award for Best Documentary, WAR PHOTOGRAPHER is the compelling portrait of the man considered the bravest and most important war photographer of our time, James Nachtwey. The film has been in competition in 36 major international film festivals, played theatrically in over 50 cities and has 5 times won prizes for Best Film or Best Documentary.

Although he has won many prestigious photography awards, including Magazine Photographer of the Year several times, Nachtwey is still not well-known by name. Most people, however, would recognize his extraordinarily powerful images of the violence and suffering of wartime that have appeared in almost every major publication worldwide over the last two decades.

For over two years Swiss filmmaker Christian Frei follows Nachtwey around the world, uncovering compassionate and unsettling images from some of the most incendiary spots on the globe — the burning farmhouses of Kosovo, the homeless and hungry of Indonesia, a battle between Israeli soldiers and Palestinian youth on the West Bank. Frei has created an enthralling yet solemn film about the renowned photographer’s daily routine and also his primary motivations, fears and beliefs.

Interviews with colleagues, including CNN’s Christiane Amanpour, help describe the remarkable personality of James Nachtwey. Hardly fitting the standard description of a hard-boiled war veteran, instead Nachtwey is a shy, unobtrusive man with the distinction of a philosophy professor and an inner reserve that have allowed him to persevere through the horrors he uncovers and records.