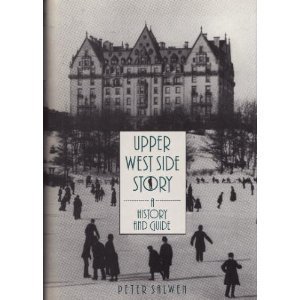 Upper West Side Story: A History and Guide

This work is both a biography and an architectural history of a city within a city spiced with lively anecdotes. Any estate agent or restauranteur will tell you that the Upper West Side is “hot”; but despite what recent urban trends suggest, it was not discovered by a band of Young Urban Professionals in the 1980s. Dutch farmers with names like Theunis Idens (he lived on what would be West End Avenue and 97th Street) and Egbert Woutersen settled it 300 years ago. The names of later residents are much more familiar: William Tecumseh Sherman, U.S. Grant, Flo Ziegfeld, Humphrey Bogart, F. Scott Fitzgerald, Arturo Toscanini, William Randolph Hearst, Gertrude Stein, Mae West, Leonard Bernstein and John Lennon. Peter Salwen tells the whole story, from the colonial merchants whose mansions commanded views of the lordly Hudson to the 19th century, when the Bloomingdale Lunatic Asylum at 116th and Broadway (now the site of Columbia University) was a prime tourist attraction; from the turn of the century, when “The West End” became synonymous with fashionable society through 50 years of decline to today’s galloping renaissance.