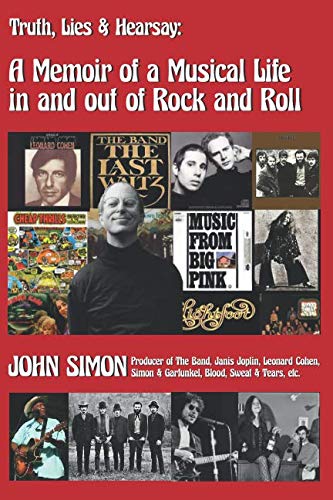 Truth, Lies & Hearsay:: A Memoir Of A Musical Life In And Out Of Rock And Roll

Chosen #5 by Billboard Magazine of the Ten Best Music Books of 2018!!!FOR THE ROCK MUSIC FAN WHO HAS EVERYTHING …from KIRKUS REVIEWS:”Simon’s star-studded debut memoir populated with humorous details and matter-of-fact commentary is incredibly readable, with plenty of quote-worthy anecdotes.Over the span of his lengthy career as a music producer, the author worked with some legendary artists, including Janis Joplin, Simon and Garfunkel, Leonard Cohen, and The Band. In this remembrance, he details his lifelong engagement with music, which follows the trajectory of American popular music as a whole, from jazz to Broadway musicals to rock ’n’ roll. An intriguing memoir about an unusual career involving some celebrated musical figures.”Producer John Simon takes you on an incredible journey through his career in music with inside tales and quirky good humor.Celebrated music producer John Simon has produced some of the greatest rock ‘n’ roll ever recorded including THE BAND’s “Music from Big Pink”, “The Band”, and “The Last Waltz”, JANIS JOPLIN’s Cheap Thrills, SIMON AND GARFUNKEL’s Bookends, and the first albums by LEONARD COHEN and BLOOD, SWEAT and TEARS. His contributions to popular music have helped tell the story of a generation in the 1960s and 70s, and now he is sharing his own.”WHEN JOHN SIMON JOINED THE BAND’S BROTHERHOOD HE FIT LIKE A GLOVE. I CAN’T IMAGINE ANOTHER RECORD PRODUCER IN THE WHOLE WORLD WHO COULD’VE MATCHED JOHN’S WORK ON: MUSIC FROM BIG PINK AND THE BAND, ALBUMS.” – – Robbie Robertson“Reflecting on the amazing life he’s led, I found myself thinking he ought to write a book. Then I realized that he did. Now he tells never-before-told tales of those rich, often rollicking years in his colorful new book.”— Steve Israel* * * * * * *Given his truly unique perspective on music and the music business, Simon has been been courted by interviewers for years. With so many anecdotes to choose from, Simon found himself only skimming the surface of his experiences. Now, in writing TRUTH, LIES & HEARSAY, he has drawn on a lifetime of numerous first-hand accounts revealed in this memoir for first time, including:•Getting down the sounds for MUSIC FROM BIG PINK and THE BAND’s 2nd album•How everything was changed by a hit record of a PAUL SIMON song that Paul didn’t even like•Experiencing the volatile personal dynamics during the recording of CHEAP THRILLS by BIG BROTHER AND THE HOLDING COMPANY featuring their new vocalist, JANIS JOPLIN•Living and playing in Woodstock when it was just a small-town safe haven for musicians.•Behind-the-scenes at THE BAND’s “farewell concert appearance” •Writing two ballet scores for legendary choreographer TWYLA THARP•Touring with American blues master, TAJ MAHAL•Recording secrets revealed and much, much more!With an unerring ear for music and eye for a good story, John Simon has amassed a collection of remarkable stories to delight any music fan.Read about Leonard Cohen, Levon Helm, Janis Joplin, Robbie Robertson, The Band, Mama Cass, Blood, Sweat & Tears, Gordon Lightfoot, Leon Russell, Eric Clapton, Wilson Pickett, Peter Yarrow, Gil Evans, Elizabeth Taylor, Joni Mitchell, Les Paul, Bob Dylan, Muddy Waters, Steve Forbert, Marshall McLuhan and The Beatles – — All of these people and more turn up in the pages of TRUTH, LIES and HEARSAY: A Memoir of a Musical Life In and Out of Rock and Roll.You will really like this book.