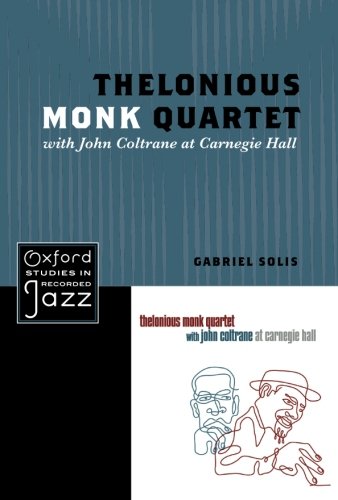 In early 2005, an engineer at the Library of Congress accidentally discovered, in an unmarked box, the recording of Thelonious Monk’s and John Coltrane’s performance at a 1957 benefit concert at Carnegie Hall. Long considered one of the most important musical meetings in modern jazz, Monk’s and Coltrane’s work together during a scant few months in 1957 had, until this discovery, been thought to be almost entirely undocumented.
In this book, Gabriel Solis provides an historical, cultural, and analytical study of this landmark recording, which was released by Blue Note records later in 2005. Taking a wide-ranging approach to the recording, Solis addresses issues of “liveness,” jazz teaching and learning, enculturation, and historiography. Because nearly a half century passed between when the recording was made and its public release, it is a particularly interesting lens through which to view jazz both as a historical tradition and as a contemporary cultural form. Most importantly Solis accounts for the music itself. Offering in depth analytical discussions of each composition, as well as Monk’s and Coltrane’s improvisational performances he provides insight into Monk’s impact on Coltrane as he developed his signature “sheets of sound” style, as well as into the influence of a strong side-man, like Coltrane, on Monk at his creative and professional peak. The first study of one of the most significant jazz releases of the twenty-first century, Thelonious Monk Quartet with John Coltrane at Carnegie Hall is essential reading for all jazz scholars, students, musicians, and fans.