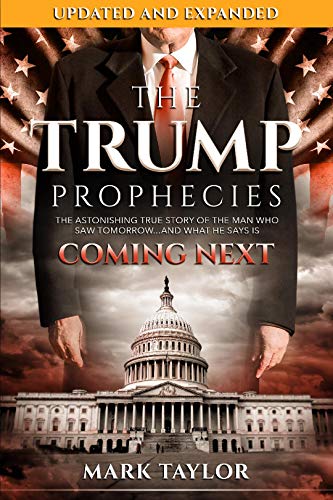 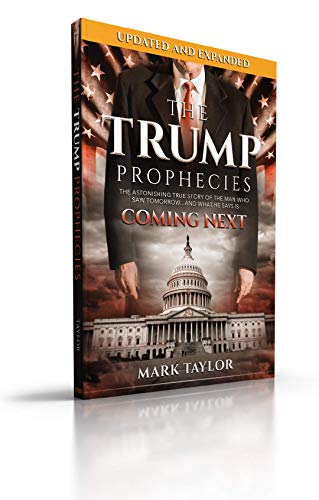 The Trump Prophecies: The Astonishing True Story of the Man Who Saw Tomorrow…and What He Says Is Coming Next: UPDATED AND EXPANDED

In November of 2016, the world witnessed the impossible. Nearly every household in America was tuned in to the election feeds, and every update pointed to a loss for the Republican Party. But when the map of the states flipped red in the final hour, there were a select few who weren’t surprised. They had always known Trump was going to win. He was chosen for such a time as this. The prophecy had said so.
This prophet, this reserved man of God, was retired firefighter Mark Taylor. The word given by the Holy Spirit was delivered on April 28, 2011, years before Trump’s victory. The election, however, was only the beginning.
In this UPDATED AND EXPANDED release of The Trump Prophecies, Defender Publishing revisits what the Lord revealed to Mark Taylor in both the celebrated “Commander-In-Chief Prophecy” that played such a key role in bolstering Trump’s 2016 win, as well as many other messages the Holy Spirit inspired Taylor to write about what would transpire next for the most powerful nation on earth today.
Fast forward… Halfway into Trump’s first term, have Taylor’s prophecies come true? Is Trump who he said he was, and is he delivering on the promises he made during his campaign? And what of the other prophecies God gave Mark regarding economics, criminal justice, leadership turnover in the Supreme Court, and several other specific details? Have all of these inspired writings carried equal reliability as “Commander-In-Chief”?
So far, Mark Taylor is batting a thousand.

In THE TRUMP PROPHECIES, UPDATED AND EXPANDED, readers will discover:
*Which of Mark Taylor’s prophecies have already been fulfilled
*How the Lord can and will use anyone regardless of education, background, or health to communicate His message to the Church of Christ
*What led to the miracle of the 2016 election, the role of we the people for the will of God in the future, and what the Body of Christ needs to do to keep His blessing on our nation
*How the enemy has utilized techniques of distraction to keep the Body’s focus off of God and onto internal, demoralizing disputes, and how this can be overcome
*The positive message of hope and encouragement that points to fresh methods of spreading the Gospel to the lost