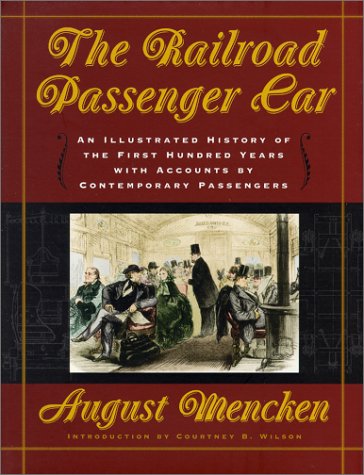 The Railroad Passenger Car: An Illustrated History of the First Hundred Years, with Accounts by Contemporary Passengers

Railroad travel in the nineteenth century was often dangerous, dirty, uncomfortable, and uncertain. Yet at the same time, most of the inventions associated with the luxury of a later era–from sleeping cars and dining cars to streamlining and even an early form of air conditioning–had already made their appearance by the time of the Civil War. In The Railroad Passenger Car August Mencken offers a fascinating look at the achievements and contradictions of this key period in railroad history.

Drawing on a wide assortment of materials–including a wealth of drawings from the U.S. Patent Office, first-hand accounts of contemporary passengers, and his own experience as a young civil engineer active in railroad construction–Mencken presents the roster of cars in which nineteenth-century travelers rode and suffered. Here are the weird and ingenious inventions designed to increase both the passengers’ comfort and the owners’ revenue; and here are the passengers’ own comments, both angry and humorous–thirty-five accounts written by passengers from 1831 to 1891 and bearing such titles as “An Inhuman Conductor,” “The Baggage Smashers of Omaha,” and “Cows on the West Chester Line.”

Published in 1957 and long out of print, The Railroad Passenger Car supplies a detailed and highly entertaining narrative richly illustrated with working drawings, cutaway images, and early photographs. New to this edition is an introduction by Courtney B. Wilson, executive director of the B& O Railroad Museum in Baltimore.