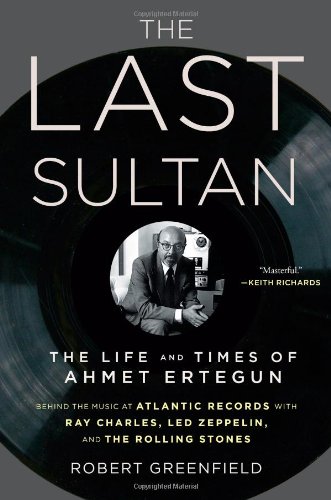 The Last Sultan: The Life and Times of Ahmet Ertegun

The Last Sultan is the definitive biography of a man who changed popular culture throughout the world. As the founder and head of Atlantic Records, Ahmet Ertegun signed and/or recorded many of the greatest musical artists of all time, among them Ruth Brown; Big Joe Turner; Ray Charles; Bobby Darin; Sonny and Cher; Eric Clapton; Buffalo Springfield; Crosby, Stills, Nash & Young; Led Zeppelin; the Rolling Stones; Bette Midler; and Kid Rock. Working alongside his older brother, Nesuhi, one of the preeminent jazz producers of all time, and the legendary Jerry Wexler, who produced great soul artists like Wilson Pickett, Solomon Burke, and Aretha Franklin, Ertegun transformed Atlantic Records from a small independent record label into a hugely profitable multinational corporation. In successive generations, he also served as a mentor to record-business tyros like Phil Spector, David Geffen, and Lyor Cohen.

Brilliant, cultured, and irreverent, Ertegun was as renowned for his incredible sense of personal style and nonstop A-list social life as his work in the studio. Born into great privilege as the son of a high-ranking Turkish diplomat during the last days of the Ottoman Empire, Ertegun spent his life bringing the black-roots music he loved to the world.

A larger-than-life figure, always hip, Ertegun lived in the grand manner but was never happier than when he found himself in some down-and-out joint listening to music late at night. Blessed with impeccable taste and brilliant business acumen, he brought rock ’n’ roll into the mainstream while creating the music that became the sound track for the lives of multiple generations.

With supporting characters like Steve Ross, Henry Kissinger, Mick Jagger, Keith Richards, Jann Wenner, and a host of others, The Last Sultan is the fascinating story of a man who always lived by his own rules.