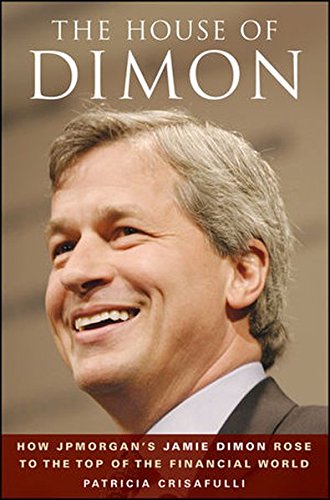 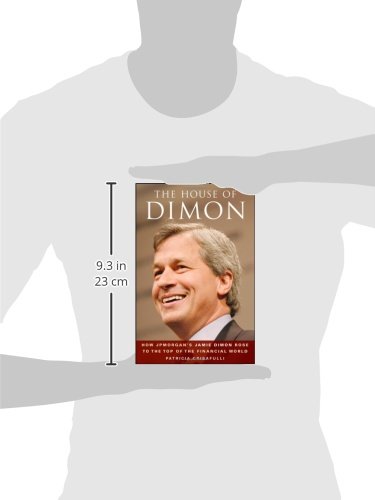 The House of Dimon: How JPMorgan’s Jamie Dimon Rose to the Top of the Financial World

Praise for The House of Dimon

“Without the profanity and showmanship, Jamie, within the world of business, reminds me most of George S. Patton, America’s premier WWll battlefield general. Both read history, prepared meticulously, and led from the front—innovatively and instinctively. Both were confrontational. When asked what unit they had served in during the war, most members of the Third Army responded proudly and simply, ‘I was with Patton.’ Perhaps one day those at JPMorgan will say the same.”
—Wick Simmons, former CEO of Nasdaq and Prudential Securities

“If you care about what it takes to be a successful CEO in the most complicated market ever, you will want to read The House of Dimon. Patricia Crisafulli has captured the growth and development of one of the most outstanding CEOs of our time.”
—Frank Zarb, Managing Director, Hellman & Friedman LLC

“The House of Dimon is a great read, allowing you to observe Dimon’s actual strategic actions. He’s a leader who doesn’t obsess over predicting the future but sets his organization on its toes ready to move in any direction when a problem or opportunity arises. For readers interested in real leadership, it’s an action thriller. Dimon walks the talk doing the right thing even when it hurts in the short term.”
—William J. White, retired chairman and CEO, Bell & Howell Company; Professor, Engineering and Applied Science, Northwestern University

“Crisafulli has accomplished a major feat: gleaning the lessons-to-be-learned from the life thus far of Jamie Dimon, a man of extraordinary talent, rock-solid philosophy of life, and boundless energy, as well as capturing the essence of many of the financial industry’s key personalities, explaining in layman’s terms the financial instruments, environment, and events of the last two decades. She has done it all in a fast-paced page-turner. The book illustrates principles we’d all benefit from living by. I wish all my business associates and students read this book.”
—Warren L. Batts, Adjunct Professor of Strategic Management, University of Chicago School of Business; former CEO of Tupperware Corp., Premark International, Mead Corp., and Triangle Corp.

“The subtitle of this book could easily be ‘How Do You Fit All Jamie Dimon’s Accomplishments in One Book’ Jamie is an inspiration to all who have the privilege of knowing him or working with him.”
—Harvey Mackay, author of the New York Times #1 bestseller Swim With the Sharks Without Being Eaten Alive

The Credit Crisis
“I think you’re going to be writing and learning from this for years: cases and books about different things from SIVs to accounting to the business purpose of CDO-squareds to regulatory rules to globalization to the balkanization of regulation…. Honestly, I think if you made a list today, you probably wouldn’t get half of them. We’re in the thick of it.”

Lessons Learned
“Experience and judgment—I don’t think they’re replaceable. You go to a lot of businesses—they don’t remember how bad things can get. It takes someone who has been there. We will never forget the aftermath of the housing bubble, but 40 years from now, believe me, someone is going to forget again somewhere.”

Dealing with the Downside
“Look where you could be wrong; admit when you’re wrong. To me it’s important to do that because I want everybody to do that, so that we actually make a better decision the next time.”

Buying Bear Stearns
“We weren’t looking to buy Bear Stearns. We wouldn’t have bought it on its own, but we were asked to look at it. We knew the financial system was extremely delicate and Lehman [Brothers bankruptcy] helped prove that.”

The Bear Stearns Negotiations
“The amazing story wasn’t the financial engineering. After I got the call from [Bear Stearns CEO] Alan Schwartz, I called [JPMorgan Investment Bank co-CEOs] Steve Black and Bill Winters, and then we had 50 or 100 people get dressed and come back to work. And by 12 hours later, there were 500 and 1,000 people working on it in every department: bond trading, equity, equity derivatives, all these areas—tax, legal, compliance, systems, ops [operations]—everyone doing their job. And that’s the amazing kind of thing: people acting that way—just trying to figure it out very quickly. That really enabled us to do [the Bear Stearns deal]. And then the comfort that when we bought the company we could actually manage all that.”

Risk Disclosure
“If you wouldn’t treat your mother that way, don’t treat the client that way. If this piece of paper tells the client how much risk they’re taking and you don’t want to give it to them, they’re probably taking on too much risk. Give them the paper.”

Financial Discipline
“You’ve got to have disciplined reporting and a disciplined review of [what’s] reported. And then it’s got to be widely shared with smart people who also have experience and judgment. You will minimize problems. You’ll still have them, by the way, but they should hopefully be smaller and fewer.”

Being Prepared
“Always have a column called ‘worst ever’ and make sure you can survive under that.” [University of Chicago Graduate School of Business, 2006]

Getting Fired by Sandy Weill
“I was the president of Citigroup. I walked in and [Weill] said, ‘I want you to resign,’ and believe me, it was like I was shocked. I didn’t expect it in any way, shape, or form.” [Kellogg School of Management, 2002]

Life after Citigroup
“It hurt. But as I tell people…it was my net worth, not my self-worth, involved in the company. I didn’t feel less of a person, but all of a sudden you do feel kind of naked out there. You don’t do this thing; you aren’t president of…Citigroup.”

Life Priorities
“My children, my family—but especially the children I’m responsible for, even though they’re kind of on their own… They’re way up here. Right next to that is humanity. Honestly, we’re not all here just for ourselves.”

Marriage and Children
“I do think that the hardest things to do in life are marriage and kids. They are like complete secrets until you do it. We teach you everything, but we don’t teach you that… You’ve got to work [at] those things.” [Kellogg School of Management, 2002]