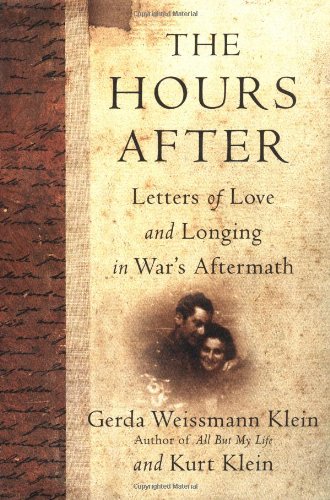 The Hours After: Letters of Love and Longing in War’s Aftermath

The love letters of Gerda and Kurt Klein, revealing one of the greatest love stories ever told.

Over fifty years ago, Gerda Weissmann was barely alive at the end of a 350-mile death march that took her from a slave labor camp in Germany to the Czech border. On May 7, 1945, the American military stormed the area, and the first soldier to approach Gerda was Kurt Klein. She guided him to her fellow prisoners who lay sick and dying on the ground, and quoted Goethe: “Noble be man, merciful and good.” Perhaps it was her irony, her composure, her evident compassion in the face of tragedy, that struck Kurt Klein. A great love had begun. Forced to separate just weeks after liberation and hours after their engagement, Gerda and Kurt began a correspondence that lasted until their reunion and wedding in Paris a year later. Their poignant letters reflect upon the horrors of war and genocide, but above all, upon the rapture and salvation of true love.