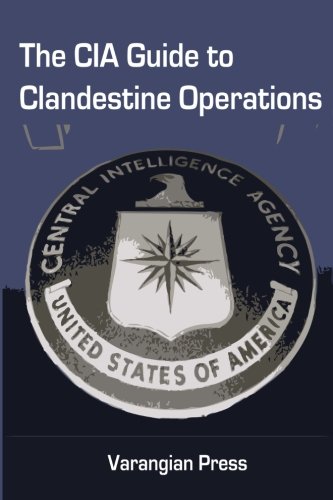 The CIA Guide to Clandestine Operations

The CIA Guide to Clandestine Operations Covert operations are an intelligence operation that is carried clandestinely and, often, outside of official channels. Covert operations aim to fulfill their mission objectives without any parties knowing who sponsored or carried out the operation. Clandestine Activity is surreptitious or secret activity undertaken by professional organizations on behalf of governments or conspiratorial groups only when overt means are inadequate or not possible to acquire such information. Since the early 1970’s, the CIA, for various reasons, has become a risk adverse intelligence organization. Clandestine and espionage operations by their very nature are high risk ventures. One solution to the CIA’s problem was to enter in to joint espionage ventures with foreign governments whose intelligence agencies were known for their professionalism and expertise. The CIA financed these operations and their partner ran the operation and assumed the risk. The CIA shared in any intelligence produced in these operations. Great Britain’s MI6 and Israel’s Mossad were frequent partners in these types of clandestine operations. The second solution was to train and liaison with lesser foreign intelligence agencies. Many times the funding for this training was concealed in Foreign Aid packages. This type of relationship allowed the CIA to maintain a “Big Brother” relationship with certain foreign intelligence agencies for years. The parameters of this relationship allowed the CIA to utilize the “Little Brother’s” resources and manpower to collect intelligence on common enemies, such as the Soviet Union. The CIA’s training materials formed the basis of, or in some cases, the entirety of the host countries espionage and clandestine operational doctrine. Much of the third world’s intelligence agencies in Asia, South America, the Middle East, and Africa owe their clandestine tradecraft to the CIA. This guide, although the current doctrine of a key American ally in the Global War on Terror, has the pure DNA of CIA clandestine tradecraft.