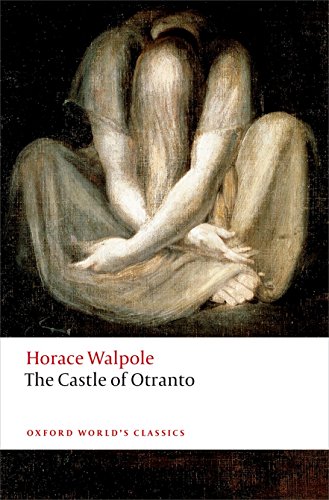 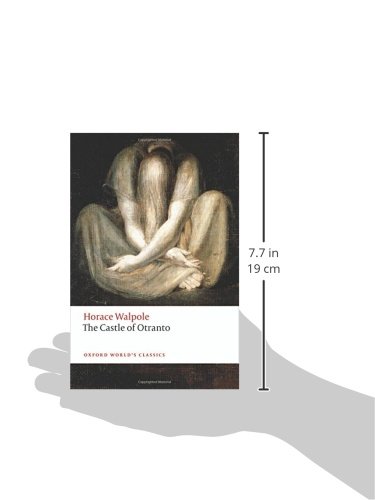 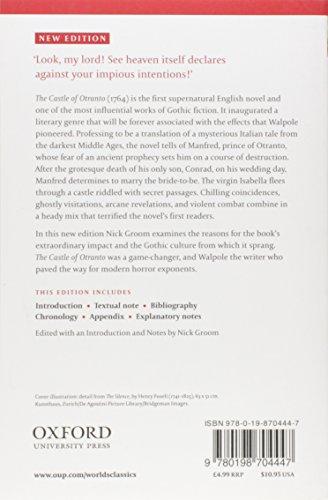 The Castle of Otranto: A Gothic Story (Oxford World’s Classics)

‘Look, my lord! See heaven itself declares against your impious intentions!’

The Castle of Otranto (1764) is the first supernatural English novel and one of the most influential works of Gothic fiction. It inaugurated a literary genre that will be forever associated with the effects that Walpole pioneered. Professing to be a translation of a mysterious Italian tale from the darkest Middle Ages, the novel tells of Manfred, prince of Otranto, whose fear of an ancient prophecy sets him on a course of destruction. After the grotesque death of his only son, Conrad, on his wedding day, Manfred determines to marry the bride to be. The virgin Isabella flees through a castle riddled with secret passages. Chilling coincidences, ghostly visitations, arcane revelations, and violent combat combine in a heady mix that is both chilling and terrifying.

In this new edition Nick Groom’s wide ranging introduction explores the novel’s Gothic context in the cultural movement that affected political and religious thinking before Walpole developed it as a literary style, helping to explain the novel’s impact on contemporaries, its importance, and Walpole’s pioneering innovations in the horror genre.

ABOUT THE SERIES: For over 100 years Oxford World’s Classics has made available the widest range of literature from around the globe. Each affordable volume reflects Oxford’s commitment to scholarship, providing the most accurate text plus a wealth of other valuable features, including expert introductions by leading authorities, helpful notes to clarify the text, up to date bibliographies for further study, and much more.