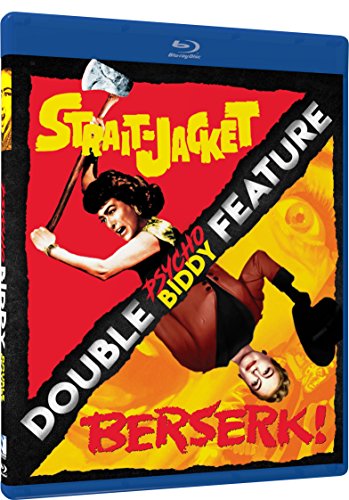 Psycho-Biddy!
Warning: Prepare to reach your Shock-Limit!
The original scream queen delivers in two classic campy thrillers from the ’60s, STRAIT-JACKET and BERSERK.
STRAIT-JACKET
Movie queen Joan Crawford (What Ever Happened to Baby Jane?) gives a terrific performance in this chiller from pioneer horror movie producer William Castle. Lucy Harbin (Crawford) goes berserk when she finds her husband in bed with another woman. Lucy axes the couple to death and spends twenty years in a mental institution for murder. After she is released, she moves in with family and hopes her nightmare is over… but a string of ax murders suddenly start occurring in the neighborhood and police think Lucy has reverted to her old ways.
BERSERK
Joan Crawford (Mildred Pierce) stars as Monica Rivers, the owner of a traveling circus plagued by a series of mysterious deaths. When a high-wire performer becomes the first victim, he is replaced by an even more daring aerialist who begins a romance with Monica. Their relationship draws envy from her business manager who is the brutal killer’s next victim. As the police begin to investigate, bigger audiences flock to the show. The mystery swirls as a cast of suspects and motives rage with jealousy and revenge.