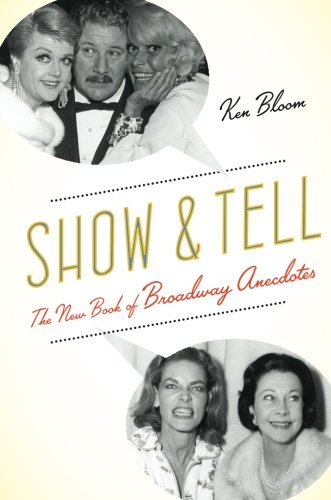 Did you know that Frank Sinatra was nearly considered for the original production of Fiddler on the Roof? Or that Jerome Robbins never choreographed the famous “Dance at the Gym” in West Side Story? Or that Lin-Manuel Miranda called out an audience member on Twitter for texting during a performance of Hamilton (the perpetrator was Madonna)? In Show and Tell: The New Book of Broadway Anecdotes, Broadway aficionado-in-chief Ken Bloom takes us on a spirited spin through some of the most intriguing factoids in show business, offering up an unconventional history of the theatre in all its idiosyncratic glory. From the cantankerous retorts of George Abbott to the literally show-stopping antics of Katharine Hepburn, you’ll learn about the adventures and star turns of some of the Broadway’s biggest personalities, and discover little-known tidbits about beloved plays and musicals from The Black Crook to Beautiful.