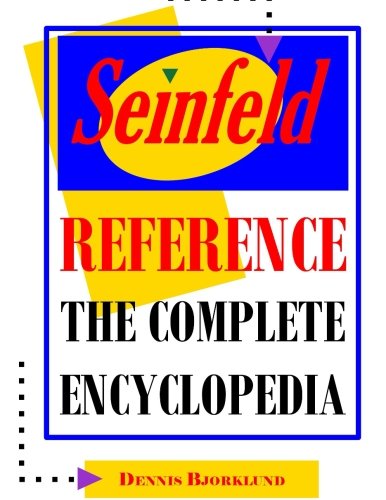 IF YOU WANT THE LATEST, MOST UP-TO-DATE INFORMATION, CHECK OUT THE 30TH ANNIVERSARY EDITION WHICH WAS RELEASED ON NOVEMBER 18, 2019. IT IS EXPANDED, UPDATED AND OFFERS THE MOST COMPLETE INFORMATION AVAILABLE ON THE MARKET

SIMPLY THE BEST SEINFELD REFERENCE BOOK. NO OTHER BOOK OR INTERNET SOURCE IS AS ACCURATE, THOROUGH, AND COMPLETE

WRITTEN BY A SEINFELD EXPERT.

Seinfeld Reference is authored by a sitcom expert who penned the most comprehensive reference book ever written about the show. This literary masterpiece starts with a timeless historical overview of the show, which was once voted “The #1 Greatest TV Series of All-Time” by TV Guide.

Seinfeld Reference also includes remarkably in-depth biographies of the show’s creators and stars (Larry David, Jerry Seinfeld, Jason Alexander, Michael Richards, Julie Louis-Dreyfus). After reading the book cover-to-cover, you will know anything and everything about the actors and their private lives.

The next section is an ingenious writing of the show’s fictional characters as if they were real, resulting in an equally sensational biography of the Seinfeld stars and recurring regulars (Jerry Seinfeld, George Costanza, Cosmo Kramer, Elaine Benes, Newman, Frank and Estelle Costanza, Morty and Helen Seinfeld, David Puddy, Susan Ross, yada, yada).

Seinfeld Reference is an essential book for every fan of the show. If you ever had a question about the show, actors, or characters, this book has all the answers. Photos included, 254 pages.

For over 25 years author Dennis Bjorklund has been an accomplished and well-respected television authority who published many small screen books covering some of the best sitcoms in history. In addition to writing books, the author provides literary contributions to numerous entertainment magazines, and provides interviews as an authoritative expert for E! Entertainment and the Biography Channel.

He is the only television scholar to write thoroughly comprehensive books on Cheers and Seinfeld, which makes Bjorklund the only authoritative expert on these situation comedies. Here is the list of available books related to Cheers and Seinfeld that have been written by Bjorklund:

● Seinfeld Trivia: Everything About Nothing

● Seinfeld Trivia: Everything About Nothing: Multiple Choice

● Seinfeld Trivia: Everything About Nothing: Challenging

The author continues to reside in California to remain close to the heart of network television programming.