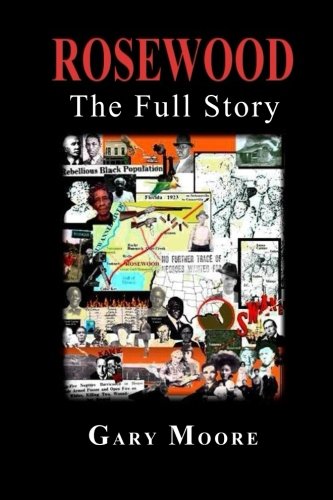 The Rosewood atrocity of January 1-7, 1923, destroyed the rural African American community of Rosewood, Florida, in an act of mob violence, but went officially unrecorded. Under pressure from cultural denial, it became a bizarre secret by the time it was unearthed in 1982 by journalist Gary Moore, who publicized it first in the St. Petersburg Times, where he was on staff, and then took it to “60 Minutes,” where he served as background reporter on a television segment airing in 1983. Tracing the previously uninterviewed Rosewood survivors, witnesses and other informants, Moore has become acknowledged as the authority on the Rosewood evidence, assigned as consultant in 1994 by separate investigations by the Florida Attorney General’s Office and the Florida Department of Law Enforcement during the Rosewood claims case of 1991-1994 in the Florida Legislature. He was contracted to provide a summary of the events in an inquiry by the Florida State University System, and presently receives information referrals from the Southeastern Regional Black Archives at Florida A & M University and University Press of Florida. The Rosewood case has emerged as a landmark not only in racial injustice but in mass psychology, revealing the workings of mass denial and mass media distortion. Its witness pool, whose evidence helps reveal the ways that public truth was warped, may be the largest such body of informants ever consulted in a retrospective of a rural enigma from the “Lynching Era.” The case has also produced the nation’s first governmental financial award in belated compensation for a Lynching Era atrocity (May 4, 1994: $2.1 million). Rosewood: The Full Story seeks to place the complicated body of Rosewood evidence before the public for the first time, adhering to narrative form but without violating the picture that the evidence presents. This necessarily means addressing and debunking a body of various myths that have arisen around a highly controversial subject. An informant pool of more than 100 individuals, including eyewitnesses, secondary informants and local authorities, is supplemented and tested by a large body of background documentation from the community, such as records of births, deaths, marriages, property deeds, criminal indictments and other documentation–though the “racial cleansing” of 1923 did not itself become a subject of any official record and was effectively excised from surviving governmental and law enforcement files. The result–a plethora of peripheral records, local legends and post-traumatic narratives–presents a deep challenge to the expositor attempting to bring the full picture clearly and readably to the public. Rosewood: The Full Story uses this evidence to trace a picture of the secretive mob violence that destroyed the community of Rosewood, noting the classic features of that violence, as well as patterns of false pleading and myth that have tended to obscure the reality. The fury that swelled suddenly to consume an isolated settlement had the appearance, once the evidence is known, of what might be called human weather. In journalism and as an employee of the United Nations and investigator of atrocities in the Balkans and Latin America, the author has seen the ways that such storms not only crush lives but devastate public truth as their truths hide behind illusions. This book is moved by a hope that the “storms” of mass violence may be more systematically understood.