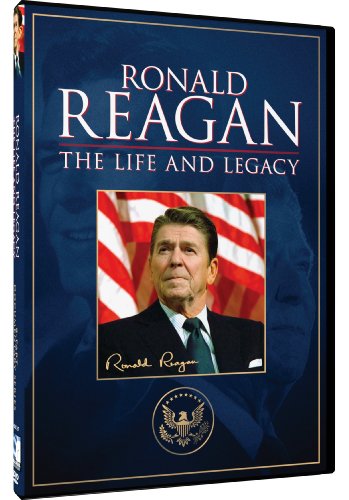 Ronald Reagan: The Life and Legacy

Over 6 Hours of footage about the Man and the Movement He Created!

Examine the life and times of the 40th President of the United States, Ronald Wilson Reagan. This eight-part series follows the amazing true story of a small-town boy from the Mid-West who rose from the shadows of an alcoholic father to become one of the most influential figures of the 20th Century. From his humble beginnings as a radio announcer to the bright lights of Hollywood, discover the talented roots of the man who ushered in a new era of conservative politics. Remembered as The Great Communicator, this series tracks the evolving years of Reagan s political career highlighting his time as Governor of California through his two-terms as Commander in-Chief. This insightful series covers the most significant events of the Reagan administration s eight years in the White House covering his attempted assassination, Reagaonomics and the ending of the Cold War. Through historical footage and expert testimonies this extraordinary biography captures Reagan s accomplishments, hardships and patriotic spirit through his final-days suffering from Alzheimer s disease. Witness the fascinating story of one man s incredible ambitions that sparked a movement and marked a dynamic change in political history in Ronald Reagan: The Life and Legacy.

1) GOP Acceptance Speech 1980
Synopsis: ‘Mr. Chairman, Mr. Vice President to be, this convention, my fellow citizens of this great nation: With a deep awareness of the responsibility conferred by your trust, I accept your nomination for the presidency of the United States’. With these words Governor Ronald Reagan became the 1980 Presidential candidate.
Information: July 17th, 1980 47min

5) Address to Nation – Iran Contra Affair
Synopsis: President Ronald Reagan addresses the Nation from the Oval Office concerning the events in the Iran-Contra Affair, a political scandal, that came to light in November 1986 in which senior United States figures agreed to facilitate the sales of arms to Iran, the subject of an arms embargo, to secure the release of hostages and to fund Nicaraguan contras or the Nicaraguan Resistance movement.
Information: August 12, 1987 16min