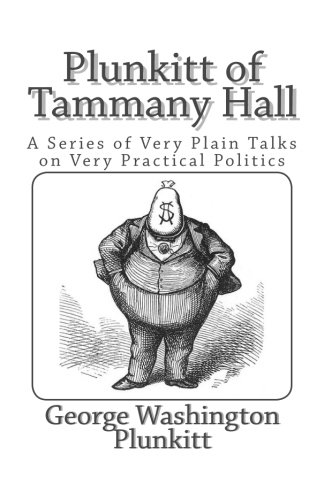 This little classic, which was once titled “Honest Graft and Dishonest Graft,” was written by George Plunkitt. It provides an entertaining if somewhat discouraging description of why politics is driven by money and why reformers are merely a flash in the pan. Another topic covered in the book, “The difference between honest graft and dishonest graft” is equally alive and well among modern politicians. A modern politician accused of exactly the type of real estate speculation Plunkitt uses as his example of “honest” graft occurred just a few years ago. The politician sat on a committee that determined the site of government project and bought up the land before the project was revealed to the public. When confronted his response was, “I didn’t break any laws.” As Plunkitt would have said, he was only practicing honest graft. Plunkitt was a crony of the infamous William M. “Boss” Tweed, who created and presided over a Democrat, ward based patronage form of government in the City of New York in the mid to late 19th century referred to then as and now “Tammany Hall.” Plunkitt was one of his side-kicks who participated in all of the perks of office and had the ability to discuss his “work” with justifications worthy of the best wit of Mark Twain. It is no coincidence that this little jewel of amateur literature has remained in print for over 100 years.