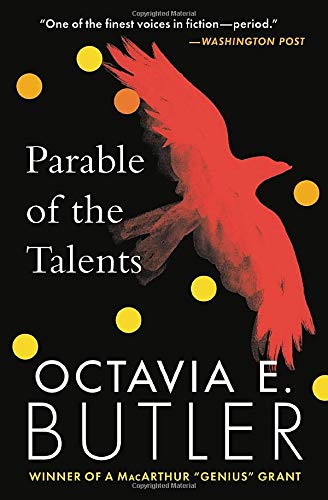 Parable of the Talents (Parable (2))

Originally published in 1998, this shockingly prescient novel’s timely message of hope and resistance in the face of fanaticism is more relevant than ever.In 2032, Lauren Olamina has survived the destruction of her home and family, and realized her vision of a peaceful community in northern California based on her newly founded faith, Earthseed. The fledgling community provides refuge for outcasts facing persecution after the election of an ultra-conservative president who vows to “make America great again.” In an increasingly divided and dangerous nation, Lauren’s subversive colony–a minority religious faction led by a young black woman–becomes a target for President Jarret’s reign of terror and oppression.Years later, Asha Vere reads the journals of a mother she never knew, Lauren Olamina. As she searches for answers about her own past, she also struggles to reconcile with the legacy of a mother caught between her duty to her chosen family and her calling to lead humankind into a better future.