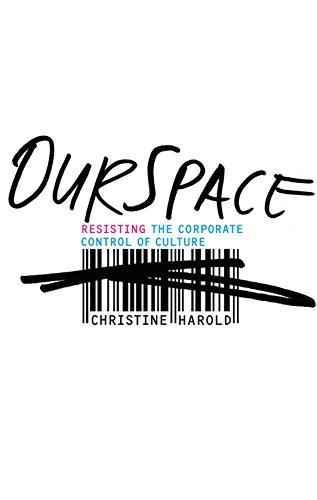 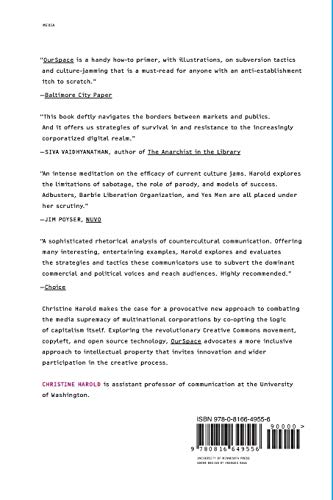 When reporters asked about the Bush administration’s timing in making their case for the Iraq war, then Chief of Staff Andrew Card responded that “from an marketing point of view, you don’t introduce new products in August.” While surprising only in its candor, this statement signified the extent to which consumer culture has pervaded every aspect of life. For those troubled by the long reach of the marketplace, resistance can seem futile. However, a new generation of progressive activists has begun to combat the media supremacy of multinational corporations by using the very tools and techniques employed by their adversaries.

In OurSpace, Christine Harold examines the deployment and limitations of “culture jamming” by activists. These techniques defy repressive corporate culture through parodies, hoaxes, and pranks. Among the examples of sabotage she analyzes are the magazine Adbusters’ spoofs of familiar ads and the Yes Men’s impersonations of company spokespersons.

While these strategies are appealing, Harold argues that they are severely limited in their ability to challenge capitalism. Indeed, many of these tactics have already been appropriated by corporate marketers to create an aura of authenticity and to sell even more products. For Harold, it is a different type of opposition that offers a genuine alternative to corporate consumerism. Exploring the revolutionary Creative Commons movement, copyleft, and open source technology, she advocates a more inclusive approach to intellectual property that invites innovation and wider participation in the creative process.

From switching the digital voice boxes of Barbie dolls and G.I. Joe action figures to inserting the silhouetted image of Abu Ghraib’s iconic hooded and wired victim into Apple’s iPod ads, high-profile instances of anticorporate activism over the past decade have challenged, but not toppled, corporate media domination. OurSpace makes the case for a provocative new approach by co-opting the logic of capitalism itself.

Christine Harold is assistant professor of speech communication at the University of Georgia.