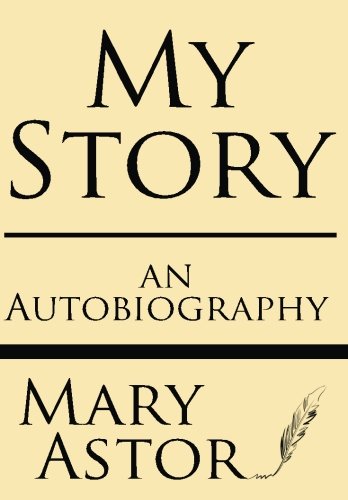 My Story: an Autobiography

My Story: an Autobiography
By Mary Astor

People have often said to me, “You haven t changed a bit!” They meant it as a compliment, but I could hear it only as an accusation, a statement of brutal fact.

And I have thought bitterly, “You are so right!” For I knew that if I had not changed I had not grown. To be a perennial child, an ethereal Peter Pan playing with pirates and Indians throughout all eternity, can be a lovely thing in the never-never land of fantasy, but it is an unhappy thing in life, The child is born so that he may become a man. It is his destiny to grow to learn, to understand, to assume responsibilities. Growth can be painful, I know; but I have found that a stunted and retarded growth can be a pain beyond belief.

My father often used to rebuke me by saying, “You are almost nine years old” (and then “ten,” and then “eleven,” and “twelve”) “and you haven t learned a thing!” Well, here I was, fifty years old, and 1 still hadn’t learned a thing! My father s rebuke had always seemed to imply a promise that years, the very accumulation of years, would bring experience and understanding, So, at whatever age I was, I wished I were older. At seventeen I longed to be twenty-five. At twenty I wanted to be a woman of the world of thirty. At thirty I read that the French thought a woman did not reach a full maturity of beauty and attractiveness until she was forty. Finally, at forty-five, I decided that the whole thing was a pack of lies. Where was the “serenity” that the years were to bring? Where was “the cooling of passion s blood?” I realized that I, who leaned on so many people and things, had been leaning even on the abstraction of time.

I was still refusing to grow up, to face the oppressive fact that I should long since have become a responsible, mature adult. I continued to seek people and things I could lean on, to escape the need for making my own decisions and assuming responsibility for my own acts. One event above all others should have brought me to a full realization of my responsibility and dignity as an individual, but even in that I failed. My conversion to the Catholic Church was almost purely emotional. I felt, instinctively, that I had finally found something substantial to lean on, never realizing that it is the Church above all else that demands a stern and courageous individuality. So my conversion did not turn out to be the conventional “conversion story” where the sinner is baptized and lives happily ever after. I leaned, and I fell. It is true, the Church would repeatedly pick me up and dust me off after each fall. She would dry my tears and heal my wounds and comfort me. Then she would gently say, “Go! Walk alone, with God.” But I couldn’t walk alone. So I…

Windham Press is committed to bringing the lost cultural heritage of ages past into the 21st century through high-quality reproductions of original, classic printed works at affordable prices.

This book has been carefully crafted to utilize the original images of antique books rather than error-prone OCR text. This also preserves the work of the original typesetters of these classics, unknown craftsmen who laid out the text, often by hand, of each and every page you will read. Their subtle art involving judgment and interaction with the text is in many ways superior and more human than the mechanical methods utilized today, and gave each book a unique, hand-crafted feel in its text that connected the reader organically to the art of bindery and book-making.

We think these benefits are worth the occasional imperfection resulting from the age of these books at the time of scanning, and their vintage feel provides a connection to the past that goes beyond the mere words of the text.