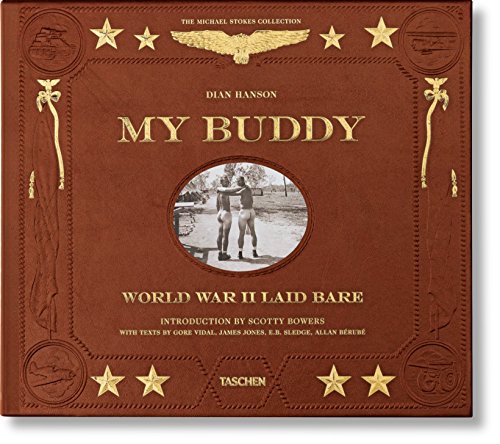 Every harrowing day for a serviceman during World War II was potentially his last. To help bolster troops against the horrors of combat, commanders encouraged them to form tight “buddy” relationships for emotional support. Many war buddies, together every moment, and depending on each other to survive, formed intimate friendships. When they weren’t fighting side by side, they relaxed together, discharging tension in boisterous―sometimes naked―play. The full extent of nude horseplay among men during World War II can’t be known, as cameras were rare and film hard to process, but some men did document this unprecedented male bonding in small, anonymous photos mostly kept hidden away until their deaths.

Los Angeles photographer Michael Stokes has spent years searching out these photos and building an archive of over 500 images. His collection includes soldiers and sailors from Australia, England, France, Italy, Poland, Russia, and the USA, cavorting on the sand in the South Pacific, shivering in the snow of Eastern Europe, posing solo in the barracks, and in great happy groups just about everywhere. These images show men barely out of boyhood, at their physical peak, responding to the reality of battle by living each day to the fullest―a side of the war never before made public.

The introduction is by Scotty Bowers, an 89-year-old ex-Marine and author of Full Service, the best-selling memoir of his sexual exploits in Hollywood, and how the war forever altered his attitudes about gay and straight, just as these photos may alter our attitudes about World War II and war buddies.