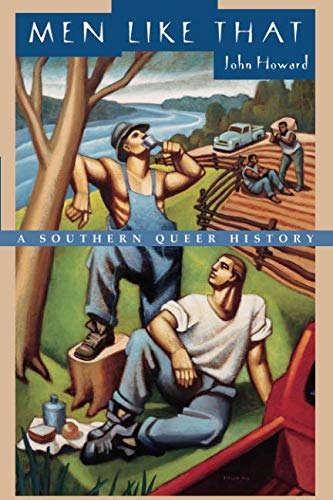 We don’t usually associate thriving queer culture with rural America, but John Howard’s unparalleled history of queer life in the South persuasively debunks the myth that same-sex desires can’t find expression outside the big city. In fact, this book shows that the nominally conservative institutions of small-town life—home, church, school, and workplace—were the very sites where queer sexuality flourished. As Howard recounts the life stories of the ordinary and the famous, often in their own words, he also locates the material traces of queer sexuality in the landscape: from the farmhouse to the church social, from sports facilities to roadside rest areas.

Spanning four decades, Men Like That complicates traditional notions of a post-WWII conformist wave in America. Howard argues that the 1950s, for example, were a period of vibrant queer networking in Mississippi, while during the so-called “free love” 1960s homosexuals faced aggressive oppression. When queer sex was linked to racial agitation and when key civil rights leaders were implicated in homosexual acts, authorities cracked down and literally ran the accused out of town.

In addition to firsthand accounts, Men Like That finds representations of homosexuality in regional pulp fiction and artwork, as well as in the number one pop song about a suicidal youth who jumps off the Tallahatchie Bridge. And Howard offers frank, unprecedented assessments of outrageous public scandals: a conservative U.S. congressman caught in the act in Washington, and a white candidate for governor accused of patronizing black transgender sex workers.

The first book-length history of the queer South, Men Like That completely reorients our presuppositions about gay identity and about the dynamics of country life.

“Men Like That goes a long way towards redressing the urban bias in American lesbian and gay-history writing. . . . Howard’s rigorous scholarship, which is based both on oral history and traditional historical documents . . . is enhanced by a disarmingly personal touch. . . . His insights into queerness and the mentality of the American South should be of great interest both to the professional gay historian and the general reader.”—Madeleine Minson, Times Higher Education Supplement

“Howard creates a history remarkable in its complexity yet intimate in its portraiture. At long last an intimate and full vision of queer lives in America that did not unfold in San Francisco’s discos.”—Kirkus Reviews

“In this groundbreaking and engrossing analysis of gay male life in postwar Mississippi, Howard . . . boldly demonstrates that gay culture and sex not only existed but flourished in small towns.”—Publishers Weekly, starred review