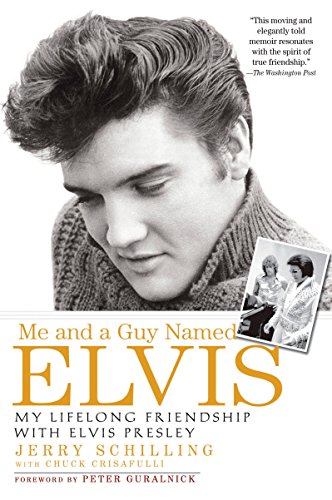 Me and a Guy Named Elvis: My Lifelong Friendship with Elvis Presley

Commemorating the thirtieth anniversary of Elvis’s death, an intimate memoir of a friendship with the greatest artist in rock and roll history, taking you from late-night parties at Graceland to the bright lights of Hollywood sets and glittering stages of Vegas.

On a lazy Sunday in 1954, twelve-year-old Jerry Schilling wandered into a Memphis touch football game, only to discover that his team was quarterbacked by a nineteen-year-old Elvis Presley, the local teenager whose first record, “That’s All Right,” had just received its first play on Memphis radio. The two became fast friends, even as Elvis turned into the world’s biggest star. In 1964, Elvis invited Jerry to work for him as part of his “Memphis Mafia,” and Jerry soon found himself living with Elvis full-time in a Bel Air mansion and, later, in his own room at Graceland. Over the next thirteen years Jerry would work for Elvis in various capacities—from bodyguard to photo double to co-executive producer on a karate film.

Me and a Guy Named Elvis looks at Presley from a friend’s perspective, offering readers the man rather than the icon. Spanning Elvis’s meteoric rise to those later troubled years, Jerry’s story offers never-before-told stories about life inside Elvis’s inner circle, and an insightful, emotional recounting of the great times, hard times, and unique times he and Elvis shared. Schilling’s vivid memories will be priceless to Elvis’s millions of fans, and his compelling life story will be fascinating to an even wider audience.