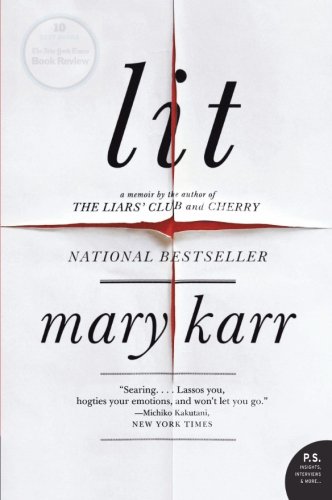 The Liars’ Club brought to vivid, indelible life Mary Karr’s hardscrabble Texas childhood. Cherry, her account of her adolescence, ‘continued to set the literary standard for making the personal universal’ (Entertainment Weekly). Now Lit follows the self-professed blackbelt sinner’s descent into the inferno of alcoholism and madness–and to her astonishing resurrection. Karr’s longing for a solid family seems secure when her marriage to a handsome, Shakespeare-quoting blueblood poet produces a son they adore. But she can’t outrun her apocalyptic past. She drinks herself into the same numbness that nearly devoured her charismatic but troubled mother, reaching the brink of suicide. A hair-raising stint in ‘The Mental Marriott,’ with an oddball tribe of gurus and saviors, awakens her to the possibility of joy and leads her to an unlikely faith. Not since Saint Augustine cried, ‘Give me chastity, Lord-but not yet!’ has a conversion story rung with such dark hilarity. Lit is about getting drunk and getting sober, becoming a mother by letting go of a mother, learning to write by learning to live. Written with Karr’s relentless honesty, unflinching self-scrutiny, and irreverent, lacerating humor, it is a truly electrifying story of how to grow up–as only Mary Karr can tell it.