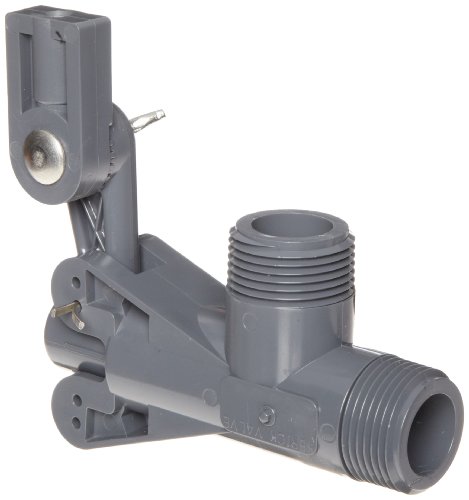 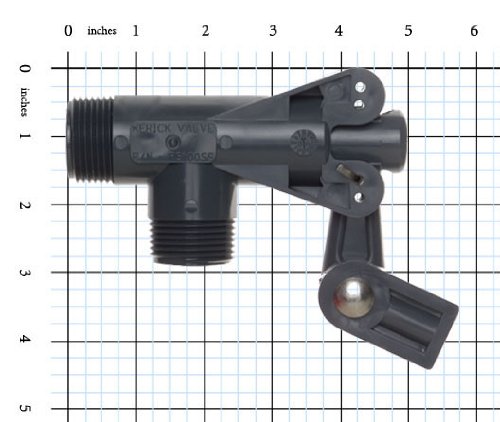 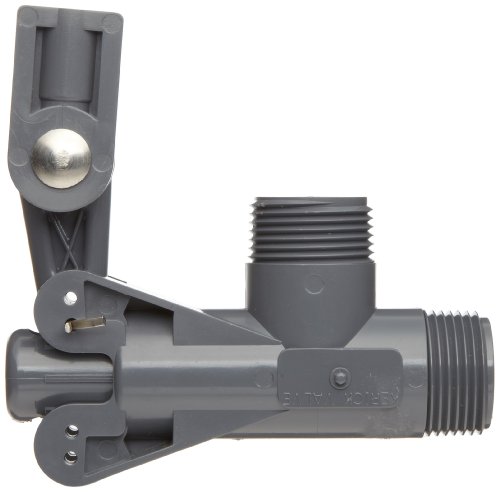 This Kerick PS100SS float valve is a standard-mount style and is made of PVC with 18-8 stainless steel hardware. The valve has lever brackets on both the top and bottom of the valve with a different fulcrum position for each bracket, which allows a “low” and “high” flow rate at a particular pressure. This valve has a 0.69″ orifice with a “low” estimated rate of flow of 42 gallons per minute (gpm) at 30 pounds per square inch (psi) and 56 gpm at 60 psi and a “high” estimated rate of flow of 51 gpm at 30 psi and 69 gpm at 60 psi. The valve inlet and outlet have 1″ NPT male threads for attaching to NPT female fittings. The valve is made of National Sanitation Foundation (NSF) approved PVC (polyvinyl chloride), its replaceable seals are made of TPE (thermoplastic elastomer) for durability and chemical resistance, and its hardware is made of 18-8 stainless steel for corrosion resistance. The valve uses a 12″ x 1/4″ stainless steel rod and a 6″ or 8″ float ball (sold separately). This float valve is suitable for use in a variety of applications, such as fountains, livestock water tanks, and chemical manufacturing plants.

Float valves use a rod and float ball attached to a valve shutoff lever to control flow in or out of a tank. The float ball rises or falls with the level of liquid in the tank, changing the angle of the valve shutoff lever. When the angle of the valve lever changes sufficiently, the valve opens or closes. Float valves are rated according to the volume of liquid that can flow through them at a particular pressure to ensure the tank can be refilled as quickly as it is emptied. The material that a float valve is constructed from must be suitable for the liquid in which it operates, which may be corrosive or at an extreme temperature. Float valves are used to automatically regulate the level of liquid within tanks in a variety of applications, such as fountains, livestock water tanks, cooling towers, and chemical manufacturing plants.