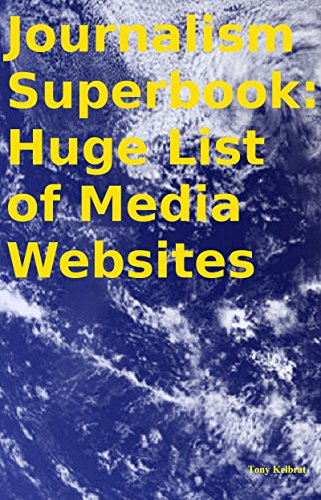 The twelve volumes of this book about the media are as follows:

This book is mainly about two things:

This book is a job and school-college book for the journalism-media-communications industry mostly for the United States and Canada but there are media contacts for every country in the world.

It’s also the biggest, most complete resource-website guide for the world media including lists of news, newspapers, magazines, radio and TV stations worldwide.

I cover quite a lot but not everything about the media including websites for news, newspapers, TV stations, magazines, the alternative news, the wire services, etc. One thing I’m a little short one is listing a good chunk of all the magazine websites out there.

Nowadays, people are on twitter and instagram. They post instantly. The only problem is the credibility of the poster. If it’s someone with a good reputation, the new post could go viral. That’s how news can spread in this new age. In the past, it was always filtered by the mainstream media. The mainstream media still controls the collective mindset of the human race but a good percentage of the people don’t trust it anymore.

A few bypass it altogether and get their info and news from alternative sources. It’s as easy as going on youtube, reddit, stumbleupon, tumblr, etc. and seeing what’s current.

I generally go on dw.com. It’s one of the few free, no-hassle live streaming TV channels on the web that works half decent unlike those African and Asian ones. The Germans have good high-tech media. If you go on CNN or most of the other ones, you either have to pay a subscription fee or you get taped videos of programs. Some of them block you if you’re not from that country like BBC.

This book focuses on types of jobs in the journalism field, job websites and a listing schools and colleges with their websites for the United States and Canada that offer these types of courses.

Beyond this book, allyoucanread.com abyznewslinks.com and refdesk.com, find a list of the major newspapers in Editor and Publisher International Yearbook at the library.

There is a huge list of newspaper websites elsewhere in this book.

Other than the main upfront so-called glamour jobs, there are many offshoot and technician jobs in these fields.

Jobs in these industries are generally on-the-job training. For instance, somebody might start out as a lowly clerk on the newsroom floor and work up to news director.

In general, communications is considered a glamour industry because of the creativity involved so competition is fierce, even for people with advanced degrees.