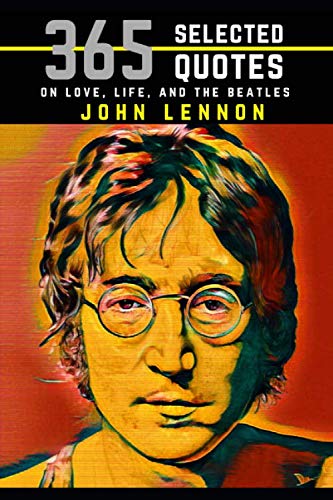 John Lennon: 365 Selected Quotes on Love, Life, and The Beatles

This book is a categorized collection of selected quotes by John Lennon, the famed singer-songwriter of the Beatles, a band that impacted the popular music scene like no other before, or since.

“Ringo is Ringo, that’s all there is to it. And he’s every bloody bit as warm, unassuming, funny and kind as he seems. He was quite simply the heart of the Beatles.”  – John Lennon

The avant garde film Self Portrait was a 15-minute time lapse of Lennon’s erect penis. What a lad. Ironically, the Lennon/Ono movie Erection was actually a time lapse of a tower block being built.

Dining with his former producer, George Martin, one night years after the band had split up, John revealed to Martin that he’d like to re-record every Beatles song. Completely amazed, Martin asked him, “Even ‘Strawberry fields’?”  His response, “Especially ‘Strawberry Fields’”.