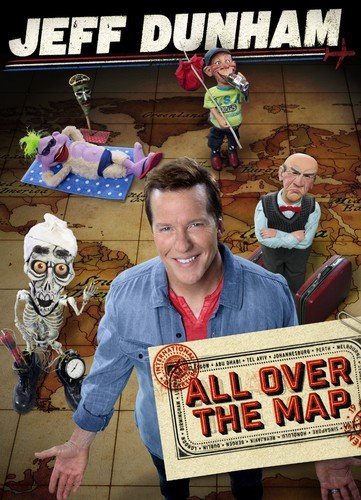 Jeff Dunham: All Over the Map

Jeff Dunham and his iconic creations, Achmed the Dead Terrorist, Walter, Peanut, and Bubba J. have embarked on an unprecedented world tour that has Dunham touching five continents, logging almost 100,000 miles and starring in arenas where dew American comedians have dared to perform. Tell the wrong joke in Singapore or United Arab Emirates and risk being handcuffed before you ever leave the stage. Bring Achmed the Dead Terrorist on stage in Malaysia after a government warning forbidding his presence, and you may begin an indefinite vacation in Kuala Lumpur. While Dunham collects and crafts pop culture references that can excite a local audience upon entering each country – Achmed on this trepidation of returning to the Middle East, Walter’s (lack of) understanding of current race relations in South Africa, Bubba J. finding kindred spirits in Australia – Jeff shows that humor is truly universal. Most of the time. Dunham works through fear, anticipation, and exhilaration as he tries to push the envelope in every concert without triggering an international crisis. All Over the Map is an inside look at America’s most successful touring comedian that is must-see for his enormous fan base and flat-out-funny for those experiencing Dunham and his signature dysfunctional family for the first time.