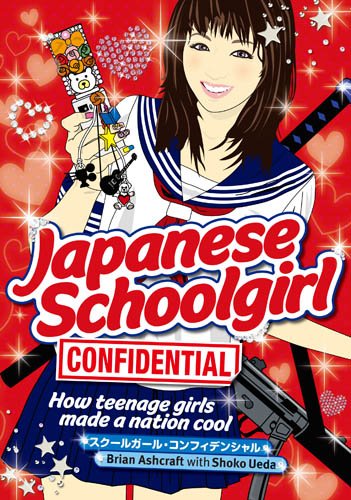 Japanese Schoolgirl Confidential: How Teenage Girls Made a Nation Cool

From manga and anime to movies, magazines, video games, advertising and music, Japanese schoolgirls are everywhere. For years, schoolgirls have shown up in internationally popular anime such as Sailor Moon, The Melancholy of Haruhi Suzumiya, and Blood: The Last Vampire. Films such as Battle Royale inspired Quentin Tarantino to include a fighting schoolgirl in Kill Bill; and recently, Rinko Kikuchi received an Oscar nomination for her role as a schoolgirl in the film Babel. There are schoolgirl characters in video games such as Street Fighter. And the “Japanese Schoolgirl Watch” column in Wired magazine has long kept an eye on the trends emerging among these stylish teens. In effect, the Japanese schoolgirl has all but replaced the “geisha-girl” as Japan’s new female icon.

Brian Ashcraft, the author of Arcade Mania!, and his sidekick, Shoko Ueda, take the reader beneath the surface to discover the secrets of this iconic figure. By talking to Japanese women, including former and current J-pop idols, well-known actresses, models, writers, and artists — along with film directors, historians and marketers — the authors reveal the true story behind Japan’s obsession with schoolgirls and answer such burning questions as:

· Where did the sailor-style uniform come from?

· How did the Japanese schoolgirl develop into a brand that can be used to sell anything from kimchi to insurance?

· Why have Japanese schoolgirls become such a symbol of girl power?

· And, most importantly, why are they so very, very cool?