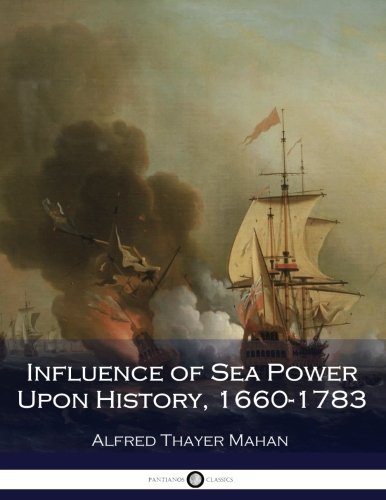 This illustrated edition of Influence of Sea Power Upon History is complete with the original tables and battle maps, permitting readers utmost comprehension of the naval engagements described.
Alfred Mahan’s exceptional examination of naval military forces and their growing significance and sway in the colonial era of Empire, remains unrivalled for its all-encompassing approach to the growth of naval conflict in the 17th and 18th centuries. Designed both as a reference book and as a vivid history in its own right, this text describes how various European powers grappled with and sought to exploit the advent of new technology and tactics upon the high seas.
Written in the late 19th century, Mahan’s accounts span some of the most pivotal battles in naval history. The Seven Years War, whereby the English demonstrated the dominant power of the Royal Navy, would prove a turning point both in the fate of that nation’s Empire, and the manner in which sea power was projected and relied upon around the world.
Naval events which took place in theatres of battle such as the Mediterranean, the Caribbean Sea and the Indian Ocean are described in great detail. The roles of the most distinguished admirals, commanders and ships are described, while the limits of sea power’s ability to tip the scales of war – such as during the American War of Independence – are discussed.
Conversely, Mahan also examines the greatest successes of naval warfare in the era; the prevalence of coastal raiding in Spain and large scale engagements in the West Indies are exemplary of sea power’s prowess. With the help of battle maps, the complex movements of the vessels in many of the major engagements are explained, with the various masterstrokes and follies of command laid bare for the judgement of the reader.
Together with the text and illustrations, this edition also includes Mahan’s original notes, which are appended as endnotes at the conclusion of each chapter.