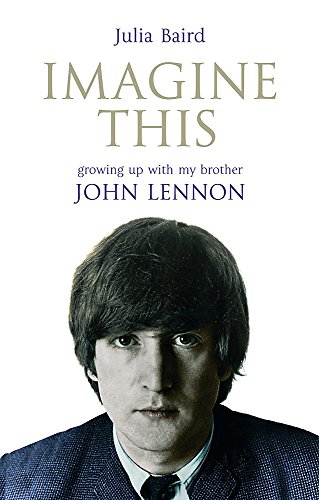 Imagine This: Growing Up with My Brother John Lennon by Baird, Julia (2007) Hardcover

Until now, the true story of John Lennon’s childhood has never been told. John’s sister Julia has herself been on a personal journey that has made it possible only now to reveal the full extent of the pain and difficulties — as well as the happier times — living inside John Lennon’s family brought. Julia reveals the various strong, self-willed and selfish women who surrounded John as he grew up. John was removed from his mother at the age of 5 to live with his Aunt Mimi, and here Julia shows for the first time the cruelty of this decision — to both mother and son, she sheds a new light on his upbringing with Mimi which is often at dramatic odds with the accepted tale. John’s frequent visits to his mother and sisters gave him the liveliness, freedom and love he sought and allowed him to develop his musical talents. The tragic death of their mother, knocked down outside Aunt Mimi’s house by a speeding car when John was 17, meant that life for him and his sisters would never be the sam