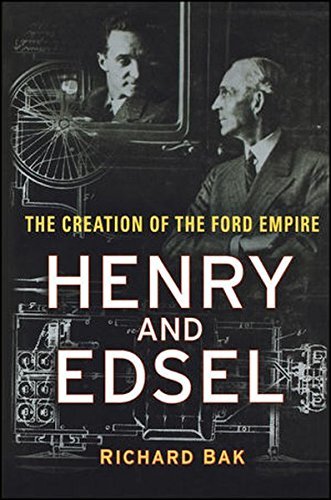 Henry and Edsel: The Creation of the Ford Empire

The epic struggle between a father and son and the building of a worldwide business empire
In this retelling of the story of the rise of Ford Motors, journalist Richard Bak offers a daring new perspective on the human drama that helped shape one of the world’s great business empires. No dry corporate history, Henry and Edsel focuses on the epic battle of wills between the unyielding Henry Ford, his gifted son Edsel, and his “second son,” the brutal and insidious Harry Bennet who rose from barroom brawler to become Henry’s heir apparent. Bak dispels the common misperception of Edsel Ford as a weak and ineffectual manager, and explains that it was in fact Edsel’s level-headedness and imaginative business solutions and that allowed the company to survive the many challenges to its survival in the first half of the twentieth century. Timed to coincide with the 100th anniversary celebration of Ford Motor Company, Henry and Edsel is sure to be warmly received by history buffs and business readers.
Richard Bak (Detroit, MI) is a veteran journalist who has written widely on the Fords and the automobile industry.