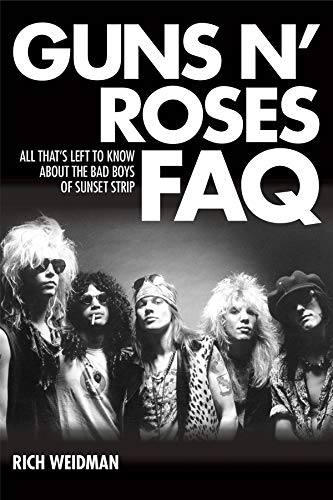 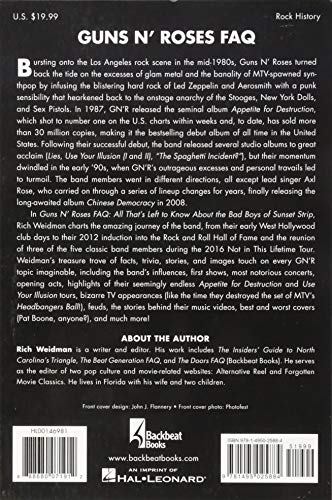 Guns N’ Roses FAQ: All That’s Left to Know About the Bad Boys of Sunset Strip

Thirty years ago, five L.A. punks unleashed their debut album upon the atrophied and decadent rock charts of Reagan’s America. Within weeks, Appetite for Destruction ascended to number one on the U.S. charts; to date, Appetite has sold more than thirty million copies, making it the bestselling U.S. debut album of all time. To say that Guns N’ Roses redefined rock ‘n’ roll is akin to asserting that Jimi Hendrix revolutionized surf music – a statement that, while technically true, does more to conceal the truth than elucidate it. GN’R turned back the tide of MTV-spawned New Wave/synth pop by infusing the blistering hard rock of Led Zeppelin and Aerosmith with a punk sensibility that hearkened back to the onstage anarchy of the Stooges, New York Dolls, and Sex Pistols. In Guns N’ Roses FAQ: All That’s Left to Know About the Bad Boys of Sunset Strip, Rich Weidman charts the amazing journey of this seminal record and the band behind it. From the gutters of West Hollywood to the Rock and Roll Hall of Fame, from Appetite to The Spaghetti Incident?, these 400 pages of hedonistic nihilism, salacious debauchery, and raw, unadulterated rock are guaranteed to turn your head, blow out your eardrums, obliterate your comfort zone, and leave you begging for more.

Written in Backbeat’s popular FAQ format, Guns N’ Roses FAQ breaks the band’s story into a series of chapters equally suitable for a straight-through read or piecemeal consumption. Weidman’s treasure trove of facts, trivia, stories, and photographs touch on every topic imaginable. Subjects explored include the band’s earliest influences and venues, most notorious concerts and opening acts, highlights from their seemingly endless Appetite for Destruction and Use Your Illusion tours, bizarre TV appearances (like the time they destroyed the set of MTV’s Headbangers Ball!), public and private feuds, music videos, best and worst covers (Pat Boone, anyone?), and much more. From the golden years of the late eighties and early nineties to the outrageous antics and self-destructive tendencies that to irreconcilable inner turmoil, from the band’s West Hollywood club days to the reunion of three of the five classic band members during the 2016 Not in This Lifetime Tour, Guns N’ Roses FAQ paints a portrait replete with sheer talent, raw power, dangerous rivalries, rock excess, and sudden reconciliation that’s simply unrivaled by anything else on the market.