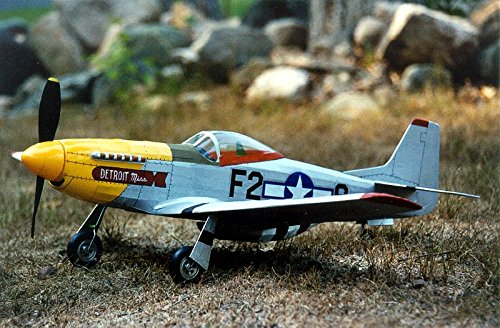 The U. S. Air Force’s P-52 Mustang has a 27.75″ wingspan. The North American P-51 Mustang was probably the best all-around single-seat piston engine fighter to be used in World War 2. The first U.S.A.A.F. combat group arrived in Britain in November 1943 and from then until the end of the war, the P-51 earned an enviable reputation as a long-range fighter-escort for the B-17 and B-24 bombers raiding deep in the heart of the German homeland. • Precision laser cut balsa parts, scale WWI plastic wheels, full set of decals, vacuum formed plastic parts and all accessories needed • Perfect for rubber power, U-Control and free flight as well as for display • Complete instructions for building either to fly or for static display