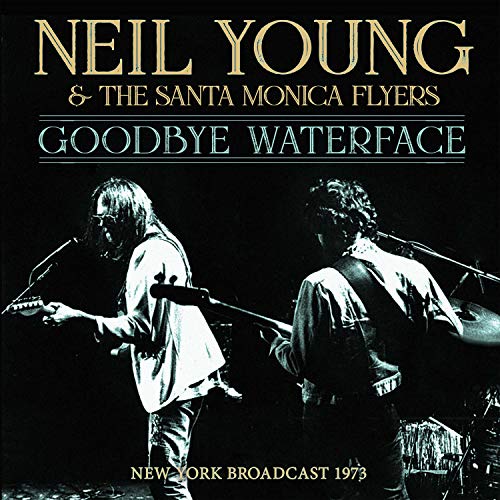 LATE 1973 RECORDING FROM NY & THE SANTA MONICA FLYERS
In the second half of 1973, Neil Young formed The Santa Monica Flyers, with Crazy Horse’s rhythm section augmented by Nils Lofgren on guitar and piano and Harvest/Time Fades Away veteran Ben Keith on pedal steel guitar. Deeply affected by the drug-induced deaths of Danny Whitten and roadie Bruce Berry, Young recorded an album specifically inspired by the incidents, Tonight’s the Night. The album’s dark tone and rawness led Reprise to delay its release and Young had to pressure them for two years before they would do so; it finally came out on in June 1975.

By late ’73, Young and The Flyers were touring and performing songs, as yet unreleased, later to be included on Tonight’s The Night. On November 15th the ensemble performed at Queen’s College in Flushing, New York, for a show which remains quite staggering and is featured on this CD in its entirety. Including six cuts from Tonight….., plus a smattering of numbers from previous records, this concert, released here for the first time, is unlike any other Neil Young ever played.