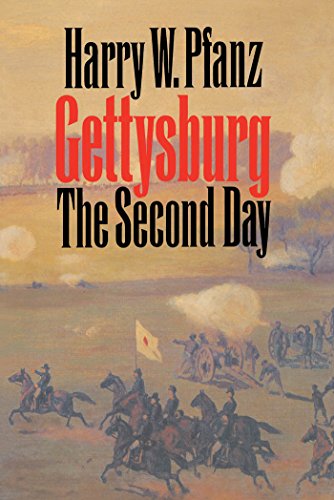 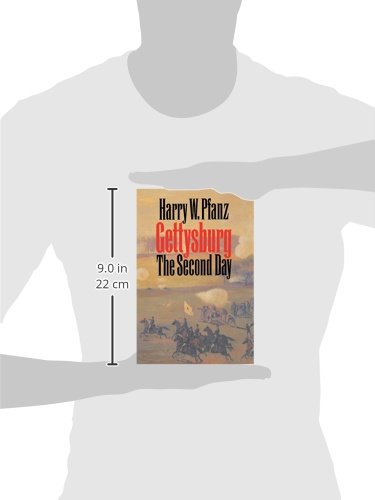 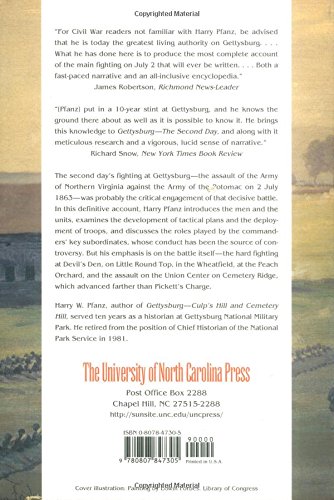 The second day’s fighting at Gettysburg–the assault of the Army of Northern Virginia against the Army of the Potomac on 2 July 1863–was probably the critical engagement of that decisive battle and, therefore, among the most significant actions of the Civil War.

Harry Pfanz, a former historian at Gettysburg National Military Park, has written a definitive account of the second day’s brutal combat. He begins by introducing the men and units that were to do battle, analyzing the strategic intentions of Lee and Meade as commanders of the opposing armies, and describing the concentration of forces in the area around Gettysburg. He then examines the development of tactical plans and the deployment of troops for the approaching battle. But the emphasis is on the fighting itself. Pfanz provides a thorough account of the Confederates’ smashing assaults — at Devil’s Den and Litle Round Top, through the Wheatfield and the Peach Orchard, and against the Union center at Cemetery Ridge. He also details the Union defense that eventually succeeded in beating back these assaults, depriving Lee’s gallant army of victory.

Pfanz analyzes decisions and events that have sparked debate for more than a century. In particular he discusses factors underlying the Meade-Sickles controversy and the questions about Longstreet’s delay in attacking the Union left. The narrative is also enhanced by thirteen superb maps, more than eighty illustrations, brief portraits of the leading commanders, and observations on artillery, weapons, and tactics that will be of help even to knowledgeable readers.

Gettysburg–The Second Day is certain to become a Civil War classic. What makes the work so authoritative is Pfanz’ mastery of the Gettysburg literature and his unparalleled knowledge of the ground on which the fighting occurred. His sources include the Official Records, regimental histories and personal reminiscences from soldiers North and South, personal papers and diaries, newspaper files, and last — but assuredly not least — the Gettysburg battlefield. Pfanz’s career in the National Park Service included a ten-year assignment as a park historian at Gettysburg. Without doubt, he knows the terrain of the battle as well as he knows the battle itself.