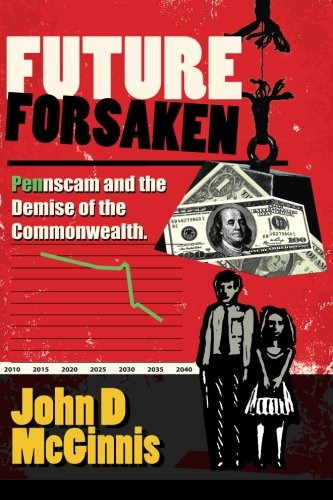 FUTURE FORSAKEN: PENnscam and the Demise of the Commonwealth is a comprehensive look at the history and dynamics of the worst financial crisis in the history of Pennsylvania. The two state pension systems, SERS and PSERS, have cumulative unfunded liabilities over $125 billion or nearly $10,000 for every man, woman, and child in the state. This crushing debt impends a dire future for the Commonwealth of Pennsylvania. In this book, Dr. McGinnis examines the legislation and the elected officials who created the massive problem that is borne by the taxpayers of the commonwealth far into the future. He looks at the Pennsylvania pension trinity of inadequate funding, improper design, and poor investment management. McGinnis, who is serving in his second term in the General Assembly of Pennsylvania, details the corruption (most of it perfectly legal) that has imperiled the present and future prosperity of Pennsylvania. The medicine prescribed by Dr. McGinnis, who has a Ph.D. in finance and has earned the CFA designation as a Chartered Financial Analyst, is in three parts. First, funding should be compliant with the desiderata of the 2014 Blue Ribbon Panel on Public Pension Funding commissioned by the Society of Actuaries. Second, new public sector employees should be afforded a pure defined-contribution plan that requires no more than a 7% of payroll contribution from taxpayers. Finally, pension assets should be managed passively to reduce costs and improve returns in accord with the precepts of modern financial theory.