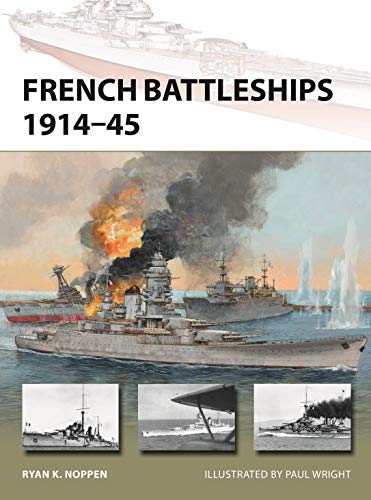 This authoritative study examines the French Navy’s last battleships, using detailed color plates and historical photographs, taking them from their inception before World War I, through their service in World War II including the scuttling of the French fleet at Toulon in 1943, and the service of Richelieu in the war against Japan.

On September 1, 1910, France became the last great naval power to lay down a dreadnought battleship, the Courbet. The ensuing Courbet and Bretagne-class dreadnoughts had a relatively quiet World War I, spending most of it at anchor off the entrance to the Adriatic, keeping watch over the Austro-Hungarian fleet. The constraints of the Washington Naval Treaty prevented new battleships being built until the 1930s, with the innovative Dunkerque-class and excellent Richelieu-class of battleships designed to counter new German designs.

After the fall of France in 1940, the dreadnoughts and fast battleships of the Marine Nationale had the unique experience of firing against German, Italian, British, and American targets during the war.