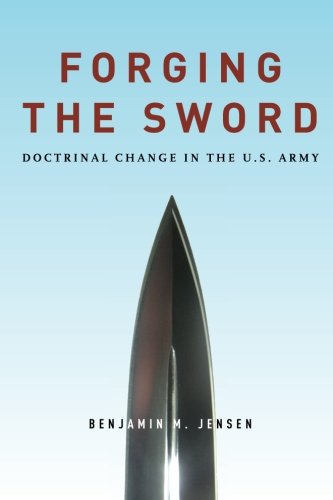 Forging the Sword: Doctrinal Change in the U.S. Army

As entrenched bureaucracies, military organizations might reasonably be expected to be especially resistant to reform and favor only limited, incremental adjustments. Yet, since 1945, the U.S. Army has rewritten its capstone doctrine manual, Operations, fourteen times. While some modifications have been incremental, collectively they reflect a significant evolution in how the Army approaches warfare―making the U.S. Army a crucial and unique case of a modern land power that is capable of change. So what accounts for this anomaly? What institutional processes have professional officers developed over time to escape bureaucracies’ iron cage?

Forging the Sword conducts a comparative historical process-tracing of doctrinal reform in the U.S. Army. The findings suggest that there are unaccounted-for institutional facilitators of change within military organizations. Thus, it argues that change in military organizations requires “incubators,” designated subunits established outside the normal bureaucratic hierarchy, and “advocacy networks” championing new concepts. Incubators, ranging from special study groups to non-Title 10 war games and field exercises, provide a safe space for experimentation and the construction of new operational concepts. Advocacy networks then connect different constituents and inject them with concepts developed in incubators. This injection makes changes elites would have otherwise rejected a contagious narrative.