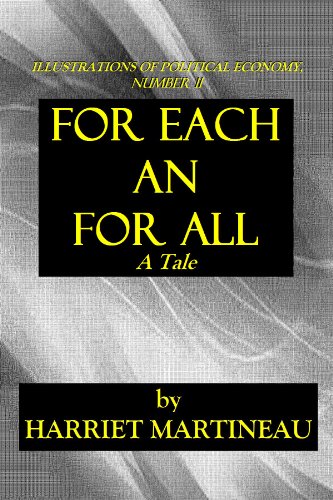 FOR EACH AND FOR ALL (ILLUSTRATIONS OF POLITICAL ECONOMY Book 11)

Summary of Principles Illustrated in This Volume

The produce of labour and capital, after rent has been paid, is divided between the labourer and the capitalist, under the names of Wages and Profits.

Where there are two shares, each determines the other, provided they press equally upon one another.

The increase of the supply of labour, claiming reward, makes the pressure in the present case unequal, and renders wages the regulator of profits.

The restriction of the supply of food causes the fall of both profits and wages.

The increased expense of raising food enhances its price: labour, both agricultural and manufacturing, becomes dearer, (without advantage to the labourer:) this rise of wages causes profits to fall; and this fall brings after it a reduction of the labourer’s share, or a fall of wages.

The fall of profits and wages is thus referable to the same cause which raises rent;-—to an inequality in the fertility of soils.

It is supposed by some that these tendencies to the fall of wages and profits may be counteracted by abolishing the distinctions of shares, and casting the whole produce of land, capital, and labour, into a common stock. But this is a fallacy.

For, whatever may be the saving effected by an extensive partnership, such partnership does not affect the natural laws by which population increases faster than capital. The diminution of the returns to capital must occasion poverty to a multiplying society, whether those returns are appropriated by individuals under the competitive system, or equally distributed among the members of a co-operative community.

The same checks to the deterioration of the resources of society are necessary under each system.

These are, (in addition to the agricultural improvements continually taking place,)—

1. The due limitation of the member of consumers.

2. The lightening of the public burdens, which at present abstract a large proportion of profits and wages.

3. A liberal commercial system which shall obviate the necessity of bringing poor soils into cultivation.

An excerpt from the beginning of:

The season was more than half over, and was about to be pronounced remarkably dull, when a promise of novelty was given out in the shape of a rumour that lord F——and his lady, who had been travelling abroad from the day of their marriage, had arrived in town, and that the bride’s first appearance would take place at the Duke of A——’s ball on the 20th. This information was circulated in various forms of words, all bearing a relation to what lady F——had been before she was lady F——. At the clubs, in the shops, in drawing-rooms and boudoirs, it was related that lady F——’s debut would take place on the 20th. Her first appearance on a new stage,—her return from a tour in the provinces,—her first night in a new character, all were referred to the 20th, in a manner which should prevent any one forgetting that lady F——had quitted a profession on her marriage. The curiosity was not confined to mothers and daughters, to whose observation au extraordinary marriage is the most exciting circumstance that life affords in this case, the interest was shared by their husbands and fathers. Some wondered how the proud old earl would stand the introduction of his daughter-in-law into his own society; and others, who had told lord F—— that he was a lucky fellow to have won such a glorious creature, speculated, notwithstanding, on the awkwardnesses and difficulties which must hourly arise from the choice o one so far below him in rank. He was an odd personage, however,— lord F——; and there was no telling how he would think and feel on occasions when everybody else felt alike. On the whole, greater sympathy was expressed for his sister, lady Frances, who was more likely to be mortified, —who certainly was more mortified at the connexion than the rest of her family. Her father was understood to have insisted on her making the best of the affair…