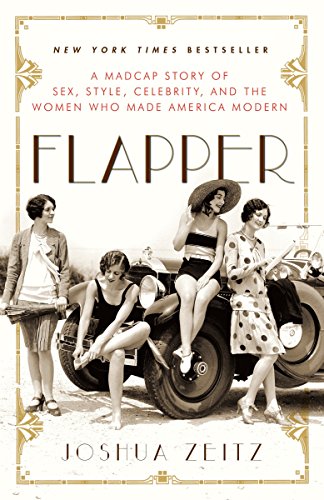 Flapper: A Madcap Story of Sex, Style, Celebrity, and the Women Who Made America Modern

Flapper is a dazzling look at the women who heralded a radical change in American culture and launched the first truly modern decade.

The New Woman of the 1920s puffed cigarettes, snuck gin, hiked her hemlines, danced the Charleston, and necked in roadsters. More important, she earned her own keep, controlled her own destiny, and secured liberties that modern women take for granted.

Flapper is an inside look at the 1920s. With tales of Coco Chanel, the French orphan who redefined the feminine form; Lois Long, the woman who christened herself “Lipstick” and gave New Yorker readers a thrilling entrée into Manhattan’s extravagant Jazz Age nightlife; three of America’s first celebrities: Clara Bow, Colleen Moore, and Louise Brooks; Dallas-born fashion artist Gordon Conway; Zelda and Scott Fitzgerald, whose swift ascent and spectacular fall embodied the glamour and excess of the era; and more, this is the story of America’s first sexual revolution, its first merchants of cool, its first celebrities, and its most sparkling advertisement for the right to pursue happiness.

Whisking us from the Alabama country club where Zelda Sayre first caught the eye of F. Scott Fitzgerald to Muncie, Indiana, where would-be flappers begged their mothers for silk stockings, to the Manhattan speakeasies where patrons partied till daybreak, historian Joshua Zeitz brings the 1920s to exhilarating life.