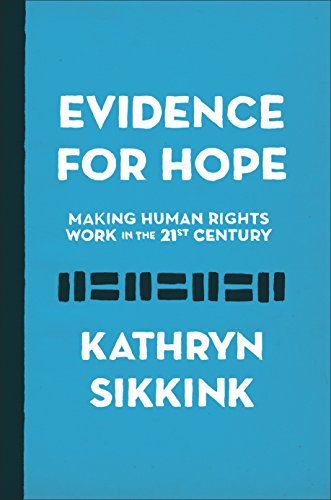 Evidence for Hope makes the case that, yes, human rights work. Critics may counter that the movement is in serious jeopardy or even a questionable byproduct of Western imperialism. They point out that Guantánamo is still open, the Arab Spring protests have been crushed, and governments are cracking down on NGOs everywhere. But respected human rights expert Kathryn Sikkink draws on decades of research and fieldwork to provide a rigorous rebuttal to pessimistic doubts about human rights laws and institutions. She demonstrates that change comes slowly and as the result of struggle, but in the long term, human rights movements have been vastly effective.

Attacks on the human rights movement’s credibility are based on the faulty premise that human rights ideas emerged in North America and Europe and were imposed on developing southern nations. Starting in the 1940s, Latin American leaders and activists were actually early advocates for the international protection of human rights. Sikkink shows that activists and scholars disagree about the efficacy of human rights because they use different yardsticks to measure progress. Comparing the present to the past, she shows that genocide and violence against civilians have declined over time, while access to healthcare and education has increased dramatically. Cognitive and news biases contribute to pervasive cynicism, but Sikkink’s investigation into past and current trends indicates that human rights is not in its twilight. Instead, this is a period of vibrant activism that has made impressive improvements in human well-being.

Exploring the strategies that have led to real humanitarian gains since the middle of the twentieth century, Evidence for Hope looks at how these essential advances can be supported and sustained for decades to come.