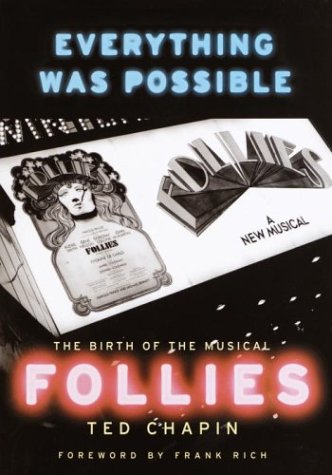 Everything Was Possible: The Birth of the Musical “Follies”

In 1971, college student Ted Chapin was in the right place at the right time.
As a production assistant, or gofer, he found himself front row center at the creation of one of the greatest of all Broadway musicals: Follies. And since (as part of a college assignment) he kept a journal of everything he saw and heard, he was able to document–in unprecedented detail–how a musical is actually made.

Now, thirty years later, he has fashioned that eyewitness account into an extraordinary chronicle that sheds new light on a still-evolving art form while vividly capturing an era long gone.
“If there has ever been an account of the creation of a major Broadway production as complete, candid, and apocrypha-free as this one,” writes Frank Rich in the foreword, “I have not found it.”
Everything Was Possible takes the reader on the roller-coaster ride that is the musical-making process, from the uncertainties of casting to drama-filled rehearsals, from the care and feeding of one-time movie stars like Alexis Smith and Yvonne De Carlo to the tension of that first performance, from the pressures of an out-of-town tryout to the exhilaration of opening night on Broadway.
But this was not just any rehearsal process, nor a typical opening night. This was the almost mythical Follies, the work Rich calls “the most elusive of landmark musicals.” Its creators were Stephen Sondheim, Hal Prince, Michael Bennett, and James Goldman–giants in the evolution of the Broadway musical, geniuses at the top of their game.

“Lord knows at least I was there,” goes a Sondheim lyric from Follies. In Everything Was Possible, we all are there–at the birth of a musical that shimmers to this day.