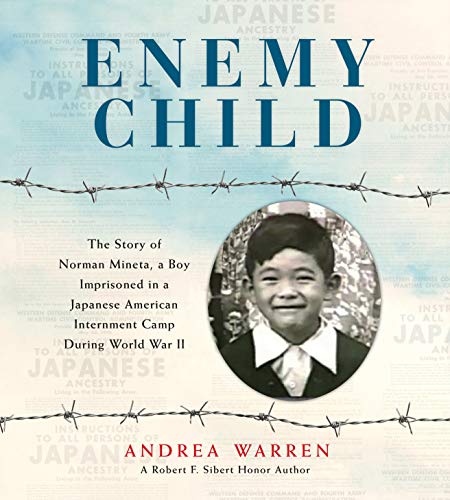 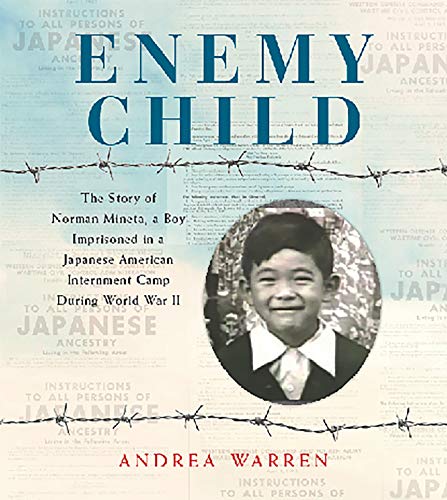 Enemy Child: The Story of Norman Mineta, a Boy Imprisoned in a Japanese American Internment Camp During World War II

One by one, things that he and his Japanese American family took for granted are taken away. In a matter of months they, along with everyone else of Japanese ancestry living on the West Coast, are forced by the government to move to internment camps, leaving everything they have known behind.

At the Heart Mountain internment camp in Wyoming, Norm and his family live in one room in a tar paper barracks with no running water. There are lines for the communal bathroom, lines for the mess hall, and they live behind barbed wire and under the scrutiny of armed guards in watchtowers.

Meticulously researched and informed by extensive interviews with Mineta himself, Enemy Child sheds light on a little-known subject of American history. Andrea Warren covers the history of early Asian immigration to the United States and provides historical context on the U.S. government’s decision to imprison Japanese Americans alongside a deeply personal account of the sobering effects of that policy.

Warren takes readers from sunny California to an isolated wartime prison camp and finally to the halls of Congress to tell the true story of a boy who rose from “enemy child” to a distinguished American statesman. Mineta was the first Asian mayor of a major city (San Jose) and was elected ten times to serve in the U.S. House of Representatives, where he worked tirelessly to pass legislation, including the Civil Liberties Act of 1988. He also served as Secretary of Commerce and Secretary of Transportation. He has had requests by other authors to write his biography, but this is the first time he has said yes because he wanted young readers to know the story of America’s internment camps.

Enemy Child includes more than ninety photos, many provided by Norm himself, chronicling his family history and his life. Extensive backmatter includes an Afterword, bibliography, research notes, and multimedia recommendations for further information on this important topic.