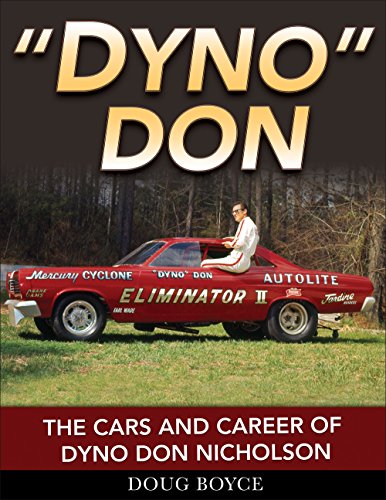 Dyno Don: The Cars and Career of Dyno Don Nicholson

Relive the roar of “Dyno Don” Nicholson’s iconic drag racing cars from Chevrolet, Mercury, and Ford and dive into at his legendary career with the detailed accounts in this book.

Nicholson’s first wins on a national level were actually in the early 1960s in Chevrolet products. He became extremely successful on the match-race circuit. Then, in 1964, he switched over to Mercury with the new Comet after General Motors enacted a factory ban on racing activities. He won 90 percent of his match races that year. He stuck with Ford and Mercury products and won throughout the 1960s and 1970s, even after Ford also pulled the plug on factory team sponsorship. He made it to the final rounds in nearly 50 national events during that period, in addition to winning championships, awards, and match races along the way.

Drivers often became associated with a particular manufacturer, such as Chevy, Ford, or Chrysler through sponsorship, factory team rides, or sometimes simply their own preference. The more successful drivers became household names in the drag racing community. Chevy had Grumpy Jenkins, Pontiac had Arnie “the Farmer” Beswick, Mopar had Sox & Martin and Dandy Dick Landy, and Ford’s most successful driver of the era was the legendary “Dyno Don” Nicholson.

If you are a fan of a certain era of racing, a Ford fan, or certainly a “Dyno Don” fan, this book will be a welcome addition to your library.