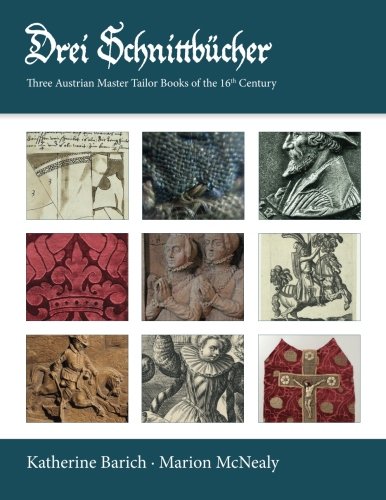 Surviving 16th century garments are very rare, with such a small sample of the wide variety of garments which were worn, many questions are left unanswered for those who wish to study the clothes of the time, or to recreate them. However, there are a few tailors’ pattern manuscripts in libraries and museums around the world. This book contains three 16th century Austrian tailors’ guild masterbook manuscripts, or schnittbuch, Nidermayr (1560), Enns and Leonfeldner (1590). Tailors in the 16th century made not only clothing, but also a great variety of other items besides: tents, saddle covers, flags, wagon covers, and garments for church ceremonies. A tailor’s masterbook contains drawings of all of the major garments and other items that a tailor have been expected to know how to make in order to pass his master tailors test. These manuscripts were created by authors in three separate towns for a similar purpose: to help journeyman tailors study and pass the master tailor exam. The original manuscripts have been transcribed and translated into English. To assist the modern reader, additional information has been included to explain the historical context of the manuscripts and the included garments. Also included are: pattern diagrams, detailed descriptions of the cut and style, illustrations and painting depicting the garments, and similar extant museum items when possible.