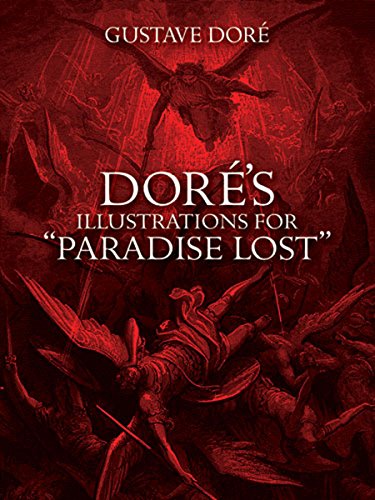 Gustave Doré’s Romantic style of illustration, supremely imaginative and richly detailed, was ideally suited to literary subjects. His wood-engraved illustrations for John Milton’s monumental epic poem Paradise Lost, recounting mankind’s fall from the grace of God through the work of Satan, were among his finest and most dramatic works. This volume presents superb reproductions of all 50 plates drawn by Doré and engraved in his studios for the original edition of Paradise Lost.
Artists and art lovers will find in these pages supreme examples of the illustrator’s art. Among the events depicted: the expulsion of Satan from heaven, Adam and Eve in Paradise, the nine-day fall of Lucifer’s legions to Hell, the Creation, the temptation of Eve, the Flood, Moses holding up the Ten Commandments, and the fearsome creatures Milton referred to as “Gorgons, and Hydras, and Chimeras dire.”
The dreamlike, otherworldly quality Doré often brought to his work seems especially appropriate for Paradise Lost with its lofty spirit and epic events. Indeed, Doré’s grand conception seems to realize perfectly Milton’s own poetic version. Appropriate quotes from the text of Paradise Lost are printed alongside each illustration. A plot summary of the entire poem is also included.