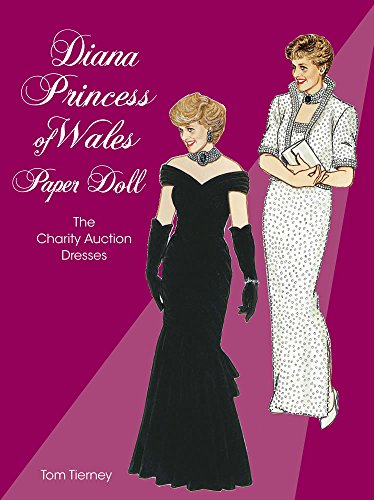 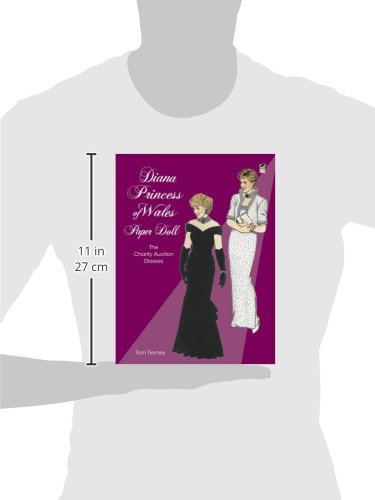 Assured of international renown by her status as the Princess of Wales, Diana was equally acclaimed for her beauty and compassion. Just a few months before her untimely death, she acted on the suggestion of her son, Prince William, and donated dozens of her dazzling gowns to charity. The Christie’s auctions, held in June 1997, raised nearly $5.5 million for AIDS and cancer treatment centers.
In this spectacular paper doll collection, artist Tom Tierney pays tribute to Diana’s charitable gesture with the loving re-creation of 31 of the auctioned items, including sumptuous raiment worn by the Princess during official visits, film premieres, state dinners, and diplomatic receptions. With this book you can dress the beloved Princess in costumes by noted designers Catherine Walker, Bruce Oldfield, Victor Edelstein, and others. The elegant fashions include dinner dresses in blue silk crepe and burgundy velvet, an emerald green satin ball dress with bustle effect, a glittering black-and-midnight-blue dance dress, the celebrated ink-blue gown worn by the Princess to a White House state dinner at which she danced with John Travolta, and numerous other costumes, each accompanied by brief descriptive notes.
This keepsake treasure will enchant not only paper doll collectors but all admirers of the fresh new style that Diana lent to royal fashion and the humanitarian warmth she brought to the world.